Matthias Kohler of Gramazio Kohler wraps up the first day of talks at World Architecture Festival 2017 in Berlin with his talk about the effect of robotics on the architecture and construction industries.

The livestream has now ended. You can watch it above or on Dezeen's Facebook page.

The talk covers the implications of automation in architecture and whether design practices will eventually be performed by machines.

Kohler is the co-founder of Gramazio Kohler Research, an architectural research group based at ETH Zurich, where Kohler is a professor of architecture and digital fabrication.

Student-led projects at the university include a robot-built pavilion made from wooden shingles, a 6-metre high brick tower assembled entirely by drones and most recently plans for the world's first house designed and built by robots.

Dezeen is media partner for World Architecture Festival 2017, which this year takes place in Berlin in conjunction with the Inside festival of interior design.

We will be broadcasting a number of talks and seminars over the next few days from both events – including talks by Rafael Viñoly and Pierre de Meuron – as well as conducting video interviews with the winners. 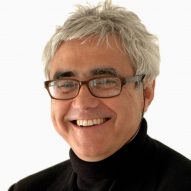