Airbnb has revealed its new headquarters in Dublin, which mark the first time the company has been able to determine the architectural layout of one of its offices.

The new headquarters, dubbed The Warehouse, was designed by the company's in-house environments team in collaboration with Dublin-based practice Heneghan Peng Architects.

Set inside a disused warehouse, the new headquarters have been completely designed from scratch – a first for Airbnb – and will become a blueprint for other campuses across the world.

Following feedback from staff at the Airbnb Portland office, the environments team were keen to create a space that made it easier for employees to find each other.

This led to the "neighbourhood" concept, which involved dividing the space up into a series of primary and secondary workspaces.

The primary workspaces consist of 29 neighbourhoods each filled with identical components – one large table, personal storage, one or two standing desks and one lounge spot.

The secondary workspaces include the large open atrium, kitchen area and the meeting rooms – each of which are inspired by existing Airbnb listings around the world and designed by local employees.

"The Warehouse was a rare opportunity for our team to start from scratch and further evolve the Belong Anywhere workplace philosophy that makes Airbnb unique," said Airbnb's lead interior designer Rebecca Ruggles.

The neighbourhoods are organised around a bleacher-style staircase that connects the basement to the first floor.

Named the Agora, after the ancient Greek term for a public open space, the staircase serves multiple purposes, including a conference space and a "lounge-style" working environment.

"Our ambition has often been moderated by the constraints of an existing structure that can't be altered," said Aaron Taylor Harvey, head of the environments team. "It was with the Dublin Warehouse that we finally had the opportunity to provoke the level of interaction and crosstalk that we've always imagined."

Airbnb was founded in 2008 by Rhode Island School of Design graduates Joe Gebbia and Brian Chesky as a site that would allow travellers to stay in ordinary homes instead of hotels.

In an interview with Dezeen, Chesky talked about how sceptical Silicon Valley had been that two designers could build a successful home-stay booking website. Airbnb is now bigger than most hotel chains.

British designer Ilse Crawford, who was one of the designers that installed their interpretations of 'home' in London's Trafalgar Square, told Dezeen that Airbnb is causing a sea-change in attitudes towards design by allowing people to experience stylish interiors first-hand rather than via magazines and websites.

Earlier this year, the company launched its own design studio, creating a house of the future for a Tokyo exhibition as its first project.

Photography is by Donal Murphy. 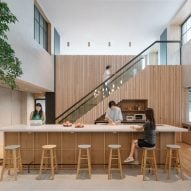