A "slightly ugly" shopping centre and a woodland holiday home shaded by two broad roofs are among the category winners announced on the second day of the World Architecture Festival 2017 awards.

Now in its tenth edition, the World Architecture Festival (WAF) showcases the best architecture built around the world in the last year.

The winner of each category will be put forward for the title of World building of the Year, which will be selected tomorrow.

Dezeen is media partner for both the WAF and Inside festival of interiors, which are taking place at Arena Berlin in Germany until 17 November.

Here are the full details of category winners from WAF day two:

As the name suggests, two roofs shade this holiday home by Irving Smith Architects, which is set in a clearing overlooking Golden Bay. Two of the three buildings comprising the home can be occupied by the family and their friends, while the third provides semi-outdoor space.

"This is about architecture, not as a frozen expression in time, but as an evolving expression of life," said the judges. "A project with environmental considerations at heart and the stewardship of one of depleting resources, the forest."

Perforated brickwork wraps one section of this healthcare clinic in Johannesburg by local practice Ntsika Architects.

The relatively small-scale building leaves the remainder of the plot to act as an outdoor waiting area for the clinic.

This laboratory complex for the University of Copenhagen comprises a 15-storey tower, nestled amongst a series of smaller buildings. Its facilities include an expansive "science plaza", intended to provide a social hub for students.

"It proves that laboratory buildings don't have to be rectangular anymore," said the judges. "Without long corridors and cellular rooms it has created fun and interesting spaces."

Vegetables covering the trellising of this project in Ho Chi Minh City by local practice Cong Sinh Architects are used to make food and drinks served to the customers of a car repair centre next door.

"The project is recognised for its very strong potential for social impact," said the judges. "The design approach was modest, yet throughly adaptable an sensitive, that would be transformed in a variety of contexts. Green cities can be edible."

"Multiple uses compressed into [a] single block," said the judges. "[It has] tension between interior complexity and neutrality of its exterior identity."

The two buildings are both lined in English Oak and are connected by a cloistered timber colonnade.

Described by the judges of this award as "the most complete religious building", this cemetery

The latticed facade of this shopping centre is made up from diagonal struts of etched concrete, while the interiors are modelled on old-fashioned arcades.

"The winning project contributes greatly to the urban fabric, it creates beautiful interior spaces," said the judges. "Highly personal it sometimes becomes slightly ugly, awkward and clumsy just [like] any human would."

This revamp of a 1970s train station in Chemnitz, Germany, saw local and regional transportation combined under one roof for the first time.

The project involved recladding the building with "pneumatic pillow elements" and responsive LED lighting, creating a facade that reacts to the movements of pedestrians and vehicles.

"A completely unexpected contribution to the city of Chemnitz," said the judges. 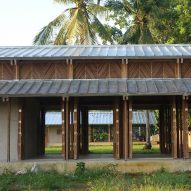