British firm Feilden Clegg Bradley Studios has worked with musician Bryan Adams to transform a disused factory in southeast Berlin into a mixed-use complex containing a cluster of creative studios.

The Spreehalle building is located in Berlin's Treptow-Köpenick district on the banks of the river Spree. It was originally constructed in 1910 and is part of a former industrial complex established by German electronics brand AEG.

Adams bought the building in 2013. The Canadian musician – who is also a photographer – then worked closely with Feilden Clegg Bradley to renovate it, with help from local studios Hoidn Wang Partner and Sauerzapfe Architekten.

The team modernised the original brick structure and its subsequent extensions to create a series of lofts, offices and galleries that will be occupied by various creatives and small businesses, with Adams himself taking on two of the spaces for his own photography studio.

Feilden Clegg Bradley described the design ambition for the ateliers as "industrial, simple, straightforward but above all indeterminate".

"The idea behind the scheme is to provide 'raw space' – space and volume to be fitted out by the end users," said the team.

The factory's double-bay hall is now separated into two wings positioned on either side of an open courtyard. The architects removed a section of the roof to create this communal area but left its metal framework in place to help evoke the original space.

Each of the wings is separated into two large rooms, where the original steel and brick structure is preserved and displayed as much as possible.

A cafe or bookshop is expected to occupy one of these spaces, thereby fulfilling part of the council's requirements that the regenerated building should become a mixed-use complex incorporating public amenities.

A new double-height extension along the eastern edge replaces a former single-storey toilet block and can be connected with the studios on this side to create an enlarged space if required.

A single-storey office wing adjoining the western side of the building was adapted and extended to accommodate eight further studios.

The existing two floors were left as found and a new double-height volume was added on top to create space for bright rooms incorporating industrial mezzanines made from galvanised-steel and sawn-timber.

Linear north-facing roof lights illuminate the concrete-lined spaces, while large glazed sliding doors open onto a balcony that extends along one side of the block and offers views of the river.

Feilden Clegg Bradley is based in London and has worked for almost four decades on projects ranging from education, housing, masterplanning and urban design, to places for art and the creative reuse of historic buildings.

The firm previously created a larch-clad shelter to protect the remains of a Roman villa in Gloucestershire, and developed an extension to the Manchester School of Art featuring a series of wood and metal staircases and bridges.

The renovation of the Spreehalle is designed to contribute towards the ongoing regeneration of the Berlin's riverside Treptow-Köpenick neighbourhood, which is being led by the local council.

The project has already seen the creation of a new public square and a pedestrian bridge. 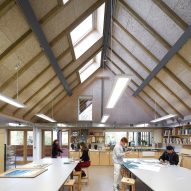 Photography is by Werner Huthmacher.