New York firm BFDO has replaced a house in Virginia, tearing down all walls and leaving just the foundation, with a larger residence topped with a rooftop garden.

Originally a 1950s ranch house, the structure was redesigned by Barker Freeman Design Office (BDFO) to add more living space and make the most of the large 17-acre (seven-hectare) waterfront property.

Coloured white, the Deep Point Road residence is composed of a single-storey and a double-storey unit joined together and wrapped by an exterior deck. The house also has a basement, and a swimming pool at the front of the site.

"The house was torn down to its foundation, which had to be kept in part due to the building's proximity to the water," said BDFO. "The Chesapeake Bay Act would have required that a new structure shift significantly away from the shore."

The original structure was single-storey, but the architects added another level to a portion of the plan. A new rooftop patio was also built over the remaining lower section.

A foyer separates the two sections of the home. Upon entering, a private living room is situated to the right, while two bedrooms can be found opposite – also orientated towards the front of the house.

At the back, a larger living space with an L-shaped kitchen faces a fireplace, which divides dining and sitting areas. Floor-to-ceiling windows and sliding glass doors line this great room, and light also pours in from skylights on either side of the centred chimney stack.

Steps near the entryway lead up to the smaller second storey, which houses the master suite. The bedrooms opens on to the roof deck, which can also be accessed by exterior stairs located outside the sitting area below.

For interior decor, walls and cabinetry are kept white with light wood flooring throughout. Subtle pops of colour are provided by soft yellow feature walls and sky blue tiles in bathrooms.

BFDO often uses vibrant accents in its interiors, as seen in a townhouse designed for two cat-lovers in Brooklyn and a cedar house also with colourful bathrooms near Rockaway Beach. 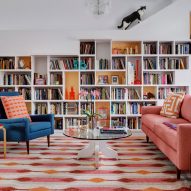