Brazilian architecture firm Estúdio BG has designed its own offices, where a meeting room is housed in a timber-clad volume and white surfaces create a bright working environment.

The studio's new headquarters is situated in a commercial building in São Paulo's Itaim neighbourhood.

"At the end of 2016, the architecture firm had the opportunity to change its physical space, which resulted in an entirely new concept," said a statement from Estúdio BG.

"The investigation of the relationship between space, matter and light is a major principle of the office's new concept."

Measuring 75 square metres, the office has room for two work tables beside the window and a small casual seating area in the corner.

A tiny kitchen and two toilets are tucked away at the back, next to the meeting room – which acts as focal point in the small space.

Estúdio BG left the building's concrete ceiling exposed, then chose various white texture and materials for the majority of the other surfaces.

"The result of the investigation is broad luminosity, which is pleasant for the working space," said the studio.

The exception is the wood panelling that clads the exterior of the meeting room. Structurally separate from the rest of the building, the box also features large glass panes that face the windows.

"The wood and glass box, which does not touch the ceiling, is an element separate from the office's volume, bringing a sense of subtlety to the space," said Estúdio BG.

Plants, books, artwork and trinkets are scattered around the office to add colour and personality. Wall-mounted shelves and freestanding cabinets provide storage space.

"Estudio BG's office illustrates the importance of a great architecture project that produces a comfortable space for social interactions and relations," said the firm. 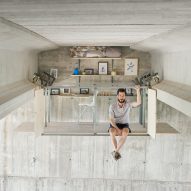 Fernando Abellanas hangs secret studio under a bridge in Valencia

Architects often design their own offices to create workplaces that perfectly fit their needs, and to show off their style and skills to potential clients.