Designers should stop proposing gimmicky solutions to the refugee crisis such as shelters, apps and emergency clothing, according to speakers at our Good Design for a Bad World talk at Dutch Design Week.

Instead, efforts should be made to the shift the negative narrative around population movements and to help make cities better able to absorb incomers, the panellists said.

"Don't design yet another shelter for refugees," said humanitarian expert Kilian Kleinschmidt. "They're not a species. So, there is no need for tech for refugees. Or design for refugees, or architecture for refugees."

Architecture critic Rene Boer described some designers' efforts to help refugees as "more of a gimmick than a structural solution".

Boer, who has worked with refugee communities in Amsterdam and elsewhere, said that "micro solutions" such as backpacks fabricated from life jackets were unhelpful. Instead, designers should focus on removing the physical and non-physical barriers that prevent refugees from travelling and integrating.

"How can we un-design some structures or systems that are actually making things worse for refugees?" asked Boer, who is managing editor of urban research platform Failed Architecture.

The "refugee crisis" is not a new phenomenon

The conversation was one of five hosted by Dezeen during Dutch Design Week in Eindhoven in October, as part of our Good Design for a Bad World series. The panel was convened to discuss how architecture and design could help tackle issues arising from population movement.

Architecture historian Michelle Provoost of Crimson pointed out that population movements have taken place throughout human history and are impossible to prevent.

"To stop migration I think would be a very non-historical position to take, since it has never happened," she said, arguing instead that integrating refugees should be seen as a planning issue.

"It is a permanent phenomenon, it happens all the time," she continued, to the agreement of Klienschmidt, who started his presentation with images of Venice, a city that was founded by refugees fleeing invaders from northern Europe.

"So how is this possible that we are sort of surprised by it all the time and that we have to make these makeshift solutions every time again?" continued Provoost, who co-authored City of Comings and Goings, a research project looking at how cities deal with fluid populations.

"Why are we not prepared to deal with these flows of people coming in and out?"

This is an issue directly related to spatial design and urbanism, she added. "Look at the places where asylum-seekers or newcomers are actually housed in our country: on the borders of the Netherlands and Germany and completely outside of the areas where the work and economic possibilities are."

The way to integrate refugees is to give them housing and jobs so they help create economic prosperity, she said. "But spatially they are prevented to do so. So there is absolutely a spatial question connected to this refugee problem."

Europe's ongoing refugee crisis, which has seen millions of people try to enter the continent by land and sea, has triggered a wide response from the creative community.

Yet refugees are a global phenomena: 2016 saw a record 65.6 million people forced to leave their homes. Population movements are predicted to increase still further in future, with climate change expected to become a major driver as rising seas, failing crops and extreme weather force tens of millions of people to move. 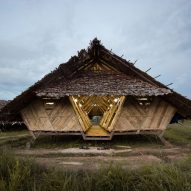 Eight designs that aim to alleviate the ongoing refugee crisis

"The main question I would say that interests us is how can architecture and design make our cities more adaptive to migration?" Provoost said.

The panel were united in calling for more intelligent, joined-up solutions and fewer token gestures.

Kleinschmidt said that over 6,000 apps had been created to help refugees navigate, find help, learn languages and so on – but none of them were being widely used or had been of significant help. "This is again because the community sort of thought, well, we need to design something special for those poor little things," he said.

Refugee camps are the wrong response to the problem

Kleinschidt, who spent 25 years working for the United Nations and managed refugee camps in Africa and Asia, said the humanitarian sector was still building "storage facilities" for displaced people in the false expectation that they would one day return to where they came from.

"The logic that displacement is something temporary has created these camps," he said. "The logic that only a refugee returning home as fast as possible is a good refugee."

Boer described how instead of waiting for others to help them, asylum seekers in Amsterdam are finding creative ways to turn their temporary status into something more permanent.

Refugees whose asylum applications have been rejected find themselves in limbo, he said. "They can't go back, but they also can't access housing or any work opportunities," said Boer. "They roam the streets with basically no way to operate in society here."

He described how they formed an action group that occupied empty properties, which they refurbished and turned into living and working spaces. They would usually get evicted from these properties eventually but in one case they managed to strike a deal with the landlord.

Refugees can solve problems themselves, given the chance

The refugees' activism and self-generated employment helped to convince the authorities to review their asylum status, with 40 per cent of them earning the right to stay.

Klienschmidt argued that efforts need to be redirected to encourage refugees to form viable communities in other parts of the world, where population movements are even more pronounced that in Europe.

Vibrant refugee cities could be established in Africa

"What if we would create major population centres together as a community in Somalia, at the Horn of Africa? There is plenty of space to actually develop new living and working and economic opportunities. All that is being left aside. All we're concentrating on is trying to prevent migration instead of managing it."

European cities are less adaptable to the influx of refugees today than in the past due to changing patterns of home ownership, Provoost claimed.

"In the Netherlands, we used to have a tradition in which social housing, affordable housing, was abundant and was a state policy," she said. "And, of course, this had diminished greatly the last 20 years."

In 1999, when refugees flooded out of Kosovo, the Netherlands was able to absorb large numbers, she said. "During the Kosovo crisis we didn't have any housing problems. But now we have. Because the social housing stock has been sold off. This is one of the results of the neoliberalisation of our country."

The education system has failed to respond to the refugee challenge

All three speakers called for schools and universities to recognise the shortage of expertise and the lack of adequate thinking about refugees and offer new courses to train a new generation of architects, designers and planned equipped to deal with the growing phenomenon of population movements.

"The design community and the planning community, especially in Western Europe, are largely overlooking this whole topic of the need of thinking about how to plan cities, how to organise, how to manage cities and urban areas in the quickly-growing parts of our world," Provoost argued.

"And this is, I think, partly because we had an era of planning in the 60s and 70s, and we've grown weary of it. And now we are talking about self-organisation and small scale things. So the need to think and conceptualise and design for this issue is not realised enough at our universities.

"Because I think the university systems have become so rigid that they have become incapable of dealing with the immediate and actual questions that are out there. They don't deal with reality."

Dezeen hosted five talks during this year's edition of Dutch Design Week, covering a range of global issues including politics and refugees.

Movies of all of the talks, including this one, are available to watch in full via our Good Design for a Bad World page. An edited version of the climate-change talk is also available, and the remaining three will be published soon.