Architecture studios COBE and BRUT have been selected to redesign the entrance to the European Union headquarters, with a proposal including a reflective doughnut-shaped canopy.

Copenhagen-based COBE and Belgian studio BRUT won an international competition to overhaul Place Schuman in Brussels, which sits between the EU's main institutions, including the European Council and the European Commission.

Their design will see the traffic roundabout transformed into a pedestrian plaza, made up of concentric circles that gently step down towards the centre.

A reflective metal canopy, described by the architects as funnel-shaped, will frame the new space.

"A parliament is usually closed-off to the public, but Place Schuman will be permanently accessible, embracing democracy and knowledge sharing. Here, all citizens of the EU will be united under one roof," said COBE founder Dan Stubbergaard.

"The roof reflects the square and the people below, creating a meeting place between nationalities, cultures, languages and genders," he continued.

"The agora underneath the roof will be designed as concentric circles, inspired by the European Parliaments' hemicycle. The circles continue in the surrounding pavement, emphasising Place Schuman as the centre of European democracy."

The revamp of Place Schuman is one of several changes underway in the European Quarter, following the opening of the new EU headquarters building in late 2016. Some of the old EU offices are being converted into shops, and a series of new public spaces are being created.

Other recent additions to the city include a shopping centre and housing complex by UNStudio, while Sou Fujimoto is working on a mixed-use tower complex on the outskirts of the city.

Pascal Smet, minister of mobility for Brussels, said the Place Schuman project "shows the change this city is making".

"We are going from a city for cars to a city for people," he stated. "Schuman will become a real urban square where residents and visitors can meet."

"The winning project as proposed by COBE and BRUT shows a fine craftsmanship, as it combines the overall complexity of this mission within a consistent and ambitious project," added city architect Kristiaan Borret.

"The new Place Schuman will become a pleasant and at the same time welcoming area. A federating project, just as Europe itself."

COBE is best known for projects including a golden library in its home city and a studded museum in Roskilde. The studio was also recently selected to create a craft brewery in Norway featuring a harbour bath, a street-food market and a huge rooftop vegetable garden.

The office will now work with BRUT to submit a planning application for Place Schuman later this year, with a view to beginning construction in 2019. 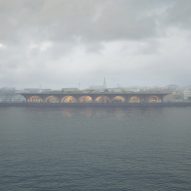