The components include planting and shelving units, which are connected by pivotal joints. This enables users to move and rotate assembled structures, so they can fit in a wide range of different spaces. 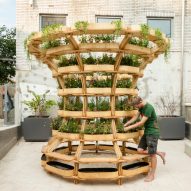 Growmore is a modular building kit for urban gardeners

As well as food production, the system is designed to create a refuge from the hustle and bustle of the city.

"Growmore is an urban gardening modular design that enhances our awareness on local production," the architects said. "It consists of very few elements, which makes it possible to build in any given context."​

Husum & Lindholm presented the design last year during the Seoul Biennale of Architecture and Urbanism – an exhibition showcasing ideas and strategies for the cities of the future.

The design has also released by the designers as an open-source system, meaning anyone can use and adapt the design to their needs and produce the components with a CNC machine.

This movie is part of Dezeen x Mini Living Initiative, a year-long collaboration with MINI exploring how architecture and design can contribute to a brighter urban future through a series of videos and talks.