Casa Aranzazu is located in a residential part of the city, on a forested site with a footprint of 7,287 square feet (677 square metres).

From the front, the concrete house appears to be rectangular, but a U-shaped layout is revealed towards the back.

The building measures 2,842 square feet (264 square metres), complete with a partially covered garage that can fit three cars, and slots between the trees dotted around the corner lot.

"We thought that the house had to develop accommodating itself in the free holes left by the trees and wrapping them to make them part of the proposed spaces," said María Victoria Besonías and Guillermo de Almeida, co-founders of Besonías Almeida Arquitectos.

"We decided to work with a spatial grid of 3.8 metres on each side, of double or single height depending on the case, which would allow us to solve for the different rooms and also the gaps that allow the trees to pass," the studio said.

The house was designed so the clients could live both indoors and outside. Allowing them to do this, a covered outdoor living room integrates a large existing oak tree near the swimming pool.

Upon entering, a foyer looks to the garden through a floor-to-ceiling window, past a floating concrete staircase. To the right is a sitting area with a large wood-burning fireplace, while two bathrooms, another glazed sitting area and a bedroom can be found on the left.

A U-shaped kitchen includes black and white cabinets, an island and a dining table. This space leads on to the large open-air area equipped with a lounge, fireplace, grill and food preparation area. This single-storey part of the home faces a grassy area that surrounds the pool, with the garage at its far end.

Upstairs is a master bedroom with an ensuite and a large walk-in closet. Across the hall are two bedrooms separated by a bathroom. In addition to the ample concrete used throughout, dark wood and black surfaces feature in the overall design.

Two lounge chairs next to the pool rest on wood flooring that matches the nearby living room.

Concrete is a popular construction material for houses in South America, and Argentina in particular.

Other examples include a low-slung house fronted by a reflection pool by Luciano Kruk, a courtyard residence with a second storey overhang by Anibal Bizzotto and Diego Cherbenco, and a polo player's house with a turfed roof and playing grounds by Estudio Ramos.

Photography is by Federico Kulekdjian. 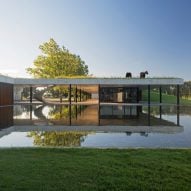