A movement is growing against cultural appropriation, but could it spell the end for historical references in architecture? asks Phineas Harper.

Compared to other art forms, architecture gets an easy ride in the court of public opinion. Filmmakers, pop musicians and fashion designers know, one ill-judged move and they'll be hung out to dry by a swarm of social media warriors. Their reputation will be demolished in a tornado of online outrage. Condemnatory articles will follow in national newspapers. Managers and agents will hastily assemble apologetic press statements. Careers can falter, even derail. Public sensitivity, and the price of a miscalculation are high.

This form of vitriolic online criticism can be brutal, but it is a way of keeping contemporary culture aligned with rapidly evolving modern values. When a movie director's use of female nudity tips into gratuitous misogyny, for example, or a when a play's casting amounts to racial bias, are important lines to establish and regularly revise.

There are, of course, times when some condemnation seems purposefully overstated to generate a readership-boosting social-media furore. Outrage means clicks after all. Generally, however, the amateur commentariat are right to insist that artists become ever-more conscientious in making work.

Architects, however, have little to fear from the Twitterati. Some high-profile news stories drag designers into the melee of public scorn, but generally we can sleep easy knowing that our work will never be exposed to the same forensic cross-examination that each frame of Taylor Swift's next music video will be. Yet this could be about to change.

Google searches for the term cultural appropriation have risen approximately 10,000 per cent since 2010

James Anaya, dean of law at the University of Colorado is leading a coalition lobbying the UN to expand international intellectual property regulations. His proposals would restrict the use of cultural items, including designs, dances and words associated with certain ethnic groups.

Anaya's work is part of a growing movement against cultural appropriation – the adoption of elements from another culture. Google searches for the term have risen approximately 10,000 per cent since 2010, as incidents that might have seemed trivial a few years ago are now taken very seriously.

Fashion designer Tory Burch angered thousands in June when she marketed a newly launched coat as African-inspired, when its design was actually derived from Romanian garments. The Navajo nation sued retailed Urban Outfitters in 2012, after the company launched a line of products using the tribe's name. Author Anthony Horowitz was told by his editor it would be inappropriate for him as a white writer to include a black lead character in a forthcoming novel. Beyonce has been criticised for wearing a sari, Bieber for wearing dreadlocks.

Debates around cultural appropriation tend to focus on everyday items such as fashion and food, which everyone can relate to. Less discussed are technical or specialist instances of appropriation. But if Anaya's campaign is successful, it could have far-reaching consequences for designers, with new controls on the use of cultural material from music to architecture.

Critics of cultural appropriation rightly condemn tasteless fancy-dress costumes that promote disrespectful, even racist stereotypes. However the awkward reality is that great architecture not only features but relies on cultural appropriation. While most art practices are tightening the boundaries of who is entitled to create what, the best architects remain committed to skilfully mixing motifs, materials and typologies across cultural thresholds. We're not just relaxed about cultural appropriation, we're experts.

Cowan Court, a new halls of residence for Churchill College in Cambridge by 6a Architects, is surely one of the most exquisite buildings of the last year. It also embodies an architectural tradition of cultural appropriation stretching back thousands of years.

The building is a three-storey timber courtyard block incorporating 68 bedrooms arranged around a quad. All the private spaces face outwards, so the continuous internal corridor becomes a communal cloister wrapping around the square garden.

Cloisters are a common feature of Cambridge associated with Medieval monastic architecture, but the early Christian design in fact derives from even older typologies. Cloisters are adaptations of Ancient Roman peristyles – private gardens surrounded by colonnades. The Roman Empire in turn imported much of its culture, including building types, from Ancient Greece.

Lucas Livingston of the University of Notre Dame has even argued that the Ionic Greek peristyle was influenced by older still Ancient Egyptian temple design. 6a's Cowan Court is, therefore, the most recent chapter in a several millennia-old story of cultural appropriation of North African design – and is brilliant for it. 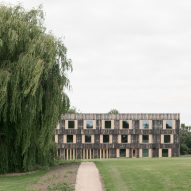 From architecture school into professional life, we study and adapt precedents to infuse our own work with a sense of history, build upon good ideas of the past and create civic legibility. The worst contemporary architecture lands with blundering indifference to its context while the best enters into correspondence with its surroundings and wider cultural landscape.

The old theory that idealised buildings could be stripped of contextual cultural symbolism and mass produced for any climate or society, which underpinned the 1930s International Style and Buckminster Fuller's Dymaxion House, is now thoroughly discredited. Architects who build without adopting some concessions to local urban character are cast as anti-civic, disrespectful and even neocolonial.

Weirdly our architectural consensus is now the polar opposite of what is making headlines in other artistic disciplines. Where filmmakers, painters and writers are increasingly expected to avoid creating work which takes material from outside their own heritage, in architecture we celebrate designers who reach far beyond their cultural bubble.

It is generally said that architecture lags years behind wider trends. If this is true, we may start to see a growing movement calling out historical references in architecture, as the public become aware of the sheer volume of cultural appropriation that encrusts every street. Will the 6as of tomorrow be attacked with accusations of cultural appropriation? Or could architecture, for once, have something to teach wider society?