London studio 6a Architects designed these student halls at the University of Cambridge's Churchill College to pay homage to the "picturesque Brutalism" of the original 1960s campus architecture.

Cowan Court is a 68-room student residence situated on the college's campus, which was founded in 1960 as a memorial to former British prime minister Sir Winston Churchill.

Following an international competition, the task of designing the first new accommodation block at the now heritage-listed campus was awarded to 6a Architects – which was also shortlisted for a project at rival school University of Oxford earlier this year.

The architects were influenced by the layered brick, timber and glass facades of the existing college buildings, which were designed by British firm Sheppard Robson in the early 1960s. They form part of a campus described by the studio as "one of the finest examples of English Brutalism in the UK".

The studio chose to develop a contemporary interpretation of the original accommodation, following a similar aesthetic, using the same square footprint and creating a central courtyard.

"Sustainability, accessibility, landscape and a new approach to communal and private space transform the raw sensuality of the brick and board-marked concrete courts of the original college into an innovative, contemporary, low-energy timber building," said the architects. 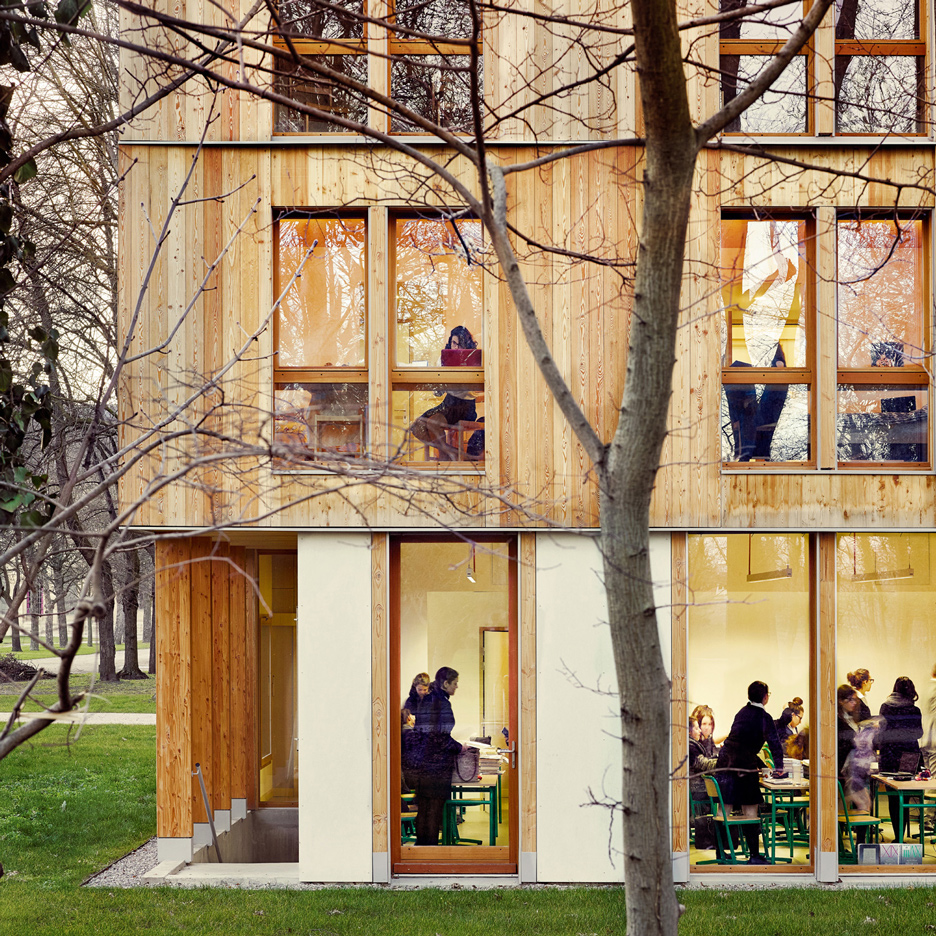 Three jettying levels clad in untreated reclaimed oak boards evoke the tone of the brickwork cladding the existing buildings, which are divided into clearly defined layers by concrete bands.

The facades of Cowan Court all curve inwards at the base and straighten towards the top, resulting in a form that echoes the entasis, or gently bowed form, of a classical column.

The surfaces are interrupted by triple-glazed windows framed in pale oak. This are misaligned and appear to spiral up and around the building's corners.

Deep window seats integrated into the highly insulated walls recall the appearance and function of the distinctive bay windows that project from the facades of the original courts.

The building's entrance leads to a cloister that extends around the perimeter of the courtyard, providing sheltered access to the accommodation and communal spaces on this level.

The landscaped space at the centre of the courtyard is planted with birch trees to create an informal garden for meeting or studying.

6a Architects also recently completed a concrete studio for Juergen Teller, inside which the photographer posed naked on a donkey for a self portrait. The studio's other projects include an extension to a house in London that curves around a tree.