The city of Miami Beach has fined the organisers of an Instagrammable ice cream-themed museum $3,000 for environmental damage, after remnants of its plastic sprinkle ball pit were found littering the streets and feared heading into the ocean.

The pool of colourful plastic pieces that visitors can plunge into is among the main attractions of the Museum of Ice Cream, a pop-up interactive art exhibit that opened in Miami Beach's Faena District last month.

But the city's Code Compliance department found that the non-edible sprinkles easily catch onto the clothes and shoes of museum-goers, and are being brushed off on the streets outside. It therefore hit the museum with a courtesy notice and two sanitation violations, amounting to $3,000 (£2,214).

The littering was revealed in a video shot by local environmentalist Dave Doebler, which showed the sprinkles up to two blocks away from the pop-up museum at 3400 Collins Avenue.

As the plastic parts fill paving cracks and clutter storm drains, concerns were also raised that they will be washed into the sea when it rains. Once in the water, the sprinkles won't be able to degrade and could cause harm to sea life or birds.

In a statement issued to the Miami New Times, the organisers of the ice-cream-themed exhibit said it was taking the issue seriously. Its plans include developing a biodegradable sprinkle for the pool, and hiring cleaners to sweep up around the museum all day with "extra attention to the waterway entrance".

Large blowers will also be used to blast off any sprinkles attached to visitor clothing. The sprinkles will then be collected and vacuumed up.

"Museum of Ice Cream is greatly invested in making sure we are putting our best foot forward with our sustainable efforts and we continually remind every guest to do a double shake upon leaving to ensure everyone has shaken off any sprinkles INSIDE of our walls," said the statement.

The first Museum of Ice Cream pop-up opened in New York City in 2016, where it gained popularity for its colourful ice cream-themed rooms that proved vastly popular with social media users. Outposts were then created in Los Angeles and San Francisco, with Miami's launching in December 2017 and closing at the end of this month.

The museum's fine follows mounting concerns over the levels of plastic in our oceans. Organisations aiming to raise awareness of the issue include Parley for the Oceans, which has longstanding collaborations with companies including Adidas.

The brand is among many that are using recycling ocean plastic to use in products including footwear and swimwear, while other designers are aiming to aid the clean-up effort with floating barriers and filtering bins. 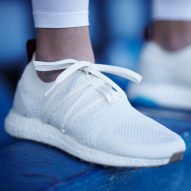