Montreal architecture studio Naturehumaine has transformed a local 1950s residence with a new grey exterior and pared-down interior, and a layout reduced to one bedroom to add space elsewhere.

The single-storey residence is built in the Prairie School style – made popular by architect Frank Lloyd Wright and typified by a low pitched roof, overhanging eaves, and large grouped windows.

Its owners wanted to expand the building and revitalise its appearance, so asked Naturehumaine to overhaul the entire property while maintaining its character.

"The existing house is partly demolished and rebuilt by reinterpreting features in a contemporary way such as a low and elongated profile, a overhanging roof and the use of masonry and wood on the facades," said Stéphane Rasselet and Marc-André Plasse, who co-founded Naturehumaine in 2004.

The windows and a garage remain in the same locations, while the front door is shifted left.

"The main window in the living room, as well as the corner window of the corner office, are now without mullions," the studio said, providing natural light and larger views outside.

A large tree has been removed in the front yard to showcase the existing chimney, dramatically changing the home's overall appearance from the street.

Grey limestone now covers the exterior, along with panels of warm-toned cedar, and the house is topped with a zinc roof to match the colour of the stone.

A fully enclosed garden and separate back terrace are among new additions to the layout. "The original surface of the ground floor was extended outwards on by an additional 1,100 square feet (102 square metres), making all the rooms much more spacious with respect to the original house," the studio said.

Upon entering is a small foyer, or vestibule, with a pale wood closet and steps leading down to a basement. The house was entirely reconfigured, with 8 foot (2.4 metre) ceilings doubling in height in a main living area.

The staircase features thin, black metal rods and a railing, similar to those in Naturehumaine's renovation of a three-storey home with a skylight in another part of Montreal.

Glazing along the top half of the entryway emphasises the home's angular lines. A 16-foot (five-metre) sloping ceiling defines a main living area, which follows the home's pitched roof.

To the right is an open-plan kitchen, dining, and living room. Cabinetry in the kitchen is either pale wood or white, with light grey floors and black countertops.

A sitting area overlooking an original fireplace is lined in dark brown wood, which carries through in the hallway and beyond.

The fireplace is coloured in grey rather than the existing brick, with light wood built-in cabinetry to its left and an enclosed garden beyond.

Off the kitchen, and towards the backyard, is a terrace that has room for another dining table. Nearby is a laundry room and small bathroom.

To the left of the entrance is an office with floor-to-ceiling cabinetry and an L-shaped desk. This side of the residence also contains the main bedroom with walk-in closet, and a large bathroom with two toilets and double sinks.

Naturehumaine has completed several other renovation projects in Montreal, including a grey-and-black extension to a 1920s brick house, an angular two-storey addition on a 1860s light stone dwelling, and a white rooftop unit built onto a 1920s brick apartment building. 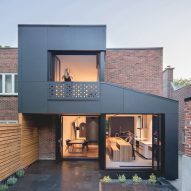