Joe Doucet has used Reebok's new Flexweave material to to create an "imaginative fitness prototype" that helps prevent runners from getting lost.

The project, named Woven Into The Future, has seen Reebok partner with three different designers, in the hope of showcasing the "limitless potential" of Flexweave – a material made from strands of fibres woven into a figure-of-eight construction.

New York-based designer Joe Doucet used the material to create a pair of "smart" running gloves, which feature GPS-enabled flashing LED lights that guide the wearer along their journey.

The user would connect their smartphone to the gloves via Bluetooth and would input their destination into a map-based app.

While running, the lights flash on either hand to indicate a left or right turn.

"The strength, flexibility and multi-surface durability of Flexweave led me to the idea of a smart running glove with a sleek, stylish silhouette," said Doucet. "My inspiration was to capture the unique qualities of the Flexweave technology through something advantageous to an active lifestyle."

Reebok's brief was to create a product that could perform as an exercise accessory – the only constraint being that it had to be made from Flexweave.

"With this creative and imaginative project, we've achieved exactly what we set out to do; demonstrate through collaborations in other fields what Flexweave can truly achieve when put to the ultimate test."

Rotterdam studio Odd Matter was also asked to work with the material. The designers combined it with a malleable foam to create a range of "active chairs", which explore the tension of Flexweave.

"We wanted to create an object that played with that tension, a bit like the string of a bow, something in which the tension and strength are palpable," said Els Woldhek, co-founder of Odd Matter.

Also, London studio Modla utilised its expertise in 3D-printing to create a mask for altitude training.

While the majority of the mask is formed from Flexweave, the valves inside which sit across the nose and mouth are 3D printed.

"I do a lot of high-intensity training so I'm interested in how such equipment works, functions and can help improve performance," said co-founder Jon Fidler.

"But we also saw the potential in the aesthetic of the Flexweave material, to create something which would blend with the mask and align with the contours of the wearer's face."

With Flexweave, Reebok is following in the footsteps of fellow sportswear brand Nike and its Flyknit material, which is similarly strong and lightweight.

The brand will release its first Flexweave running trainers next month. 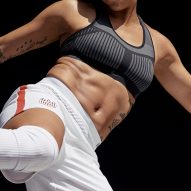