Paris-based Atelier Lavit built this treehouse around the trunk of a century-old oak in Raray, France, basing its design of criss-crossing timbers on a bird's nest.

The Origin treehouse forms part of the Cabanes des Grands Chênes, a collection of elevated guest cabins set in the grounds of the Château de Raray hotel.

Atelier Lavit, which is led by architect and designer Marco Lavit, was approached by the hotelier to create a brand new guest suite.

The client specified the room should be comfortable, functional and – like the other cabins on the estate – reference the appearance of a bird's nest.

The treehouse has an octagonal floor plan organised around the trunk of an hundred-year-old oak tree, which the architects wanted to be the "protagonist of the space".

Visitors gain access to the suite via a timber walkway that sits 10 metres above ground – it also connects to an adjacent treehouse containing a heated spa and lounge.

To form the exterior of the 23-square-metre treehouse, Lavit and his team decided to use thin slats of Douglas pine wood that interlock at the corners, echoing the entwined branches of a bird's nest.

"I've always been fascinated by the ability of birds to build their impregnable shelters. I wanted to rationalise the assembly logic of the branches and transpose this aesthetic with a new architectural approach," Marco Lavit told Dezeen.

Inside, the treehouse has been lined with light-toned poplar wood to make the space appear bright and spacious. Large windows maintain views of the surrounding greenery.

"One of the main challenges of the project was to disguise the hotel suite in the centenarian oak forest to give a feeling of protection to the inhabitants, but at the same time keeping the feeling of floating on the trees' canopy," explained Lavit.

A wooden ladder placed next to the suite's central tree trunk invites guests to climb up to the roof terrace. 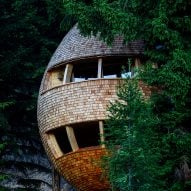