David Adjaye, Patrizia Moroso, Rossana Hu and Benjamin Hubert are among the judges of the inaugural Dezeen Awards.

The four are among the first 20 leading figures from the world of architecture and design that we are announcing ahead of the launch of the awards later this month.

The programme will celebrate the world’s best architecture, interiors and design projects and identify the best established and emerging international design studios.

The launch of Dezeen's first-ever awards programme is fast approaching, and studios that want to enter can sign up now to be among the first to hear when it goes live by visiting www.dezeen.com/awards.

We are assembling a heavyweight jury of 75 architects, designers and other key figures from the industry, representing a diverse range of design styles, geographical locations and cultural backgrounds.

In addition, Architects Ma Yansong of MAD, Mary Duggan of Mary Duggan Architects, Deborah Saunt of DSDHA and Dara Huang of Design Haus Liberty are part of our panel of judges. 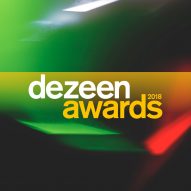