As Tom Dixon launches his collection of "authorised hacks" for IKEA, which allow customers to customise their furniture, here's a look at the best IKEA hacks from Dezeen's Pinterest boards.

Tom Dixon's Delaktig bed launched at IKEA stores last week, alongside a fabric cover and a collection of "hackable" modular elements. These hacks, which customers can do themselves, allow buyers to customise the affordable furniture to suit their own styles and specifications.

Find out more about the collection ›

Building cupboard and closet spaces at the standard size of IKEA’s shelving, US firm Edmonds + Lee Architects created this custom millwork-level aesthetic for a fraction of the price.

Better Shelter is a IKEA product that has been hacked, according to the head of the company's charitable foundation, who told Dezeen the modular refugee cabin is now being used to create doctors' surgeries and schools. However, it was later reported that 10,000 shelters were mothballed over fire fears.

Startup company Plykea created a series of birch ply doors and worktops that can be attached to IKEA's Metod kitchen cupboards.

Find out more about the sideboards ›

Lund University and Eindhoven University of Technology students, teamed up with design consultancy IDEO to create a concept kitchen table for IKEA, which can turn into a hob for cooking on, and suggest recipes based on the ingredients you put on it.

Find out more about the interactive table ›

Find out more about the storage ›

Danish brand Reform and US flooring company Madera, transformed a 1940s warehouse outside the Brooklyn Navy Yard into a Scandinavian-influenced showroom to display their hacked IKEA kitchens.

Find out more about the kitchens ›

American studio CHA:COL incorporated modified IKEA products into a unit in Los Angeles. Due to the restrained budget, the architects hacked the cabinets to form custom-made kitchen hardware.

Find out more about the cabinets and kitchen hardware ›

The design for this pop-up restaurant in The Hague was based on IKEA's showrooms and built using hacked versions of the Swedish brand's shelving systems.

Find out more about the shelving systems › 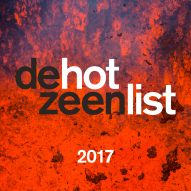 Dezeen Hot List 2017: IKEA is the most newsworthy force in design, ahead of Muji and Peter Zumthor