Spanish designer Nacho Carbonell has extended his series of lights swathed in metal mesh, which Carpenters Workshop Gallery will present at The Armory Show art fair in New York this week.

Floor lamps, a chandelier and a light-cum-table are among the new pieces that the Eindhoven-based designer has created in the style of his Light Mesh series, which also includes a standing lamps and hybrid furniture.

As with the earlier designs, metal mesh wraps around the lights in lumpy shapes that vary where the material has been scrunched, folded or pulled taught. Perforations in the metal are also different sizes to offer a range of lighting effects, while pigments are used to produce hues of blue and pink.

LED lights are hidden behind the metal gauze, held up by a welded metal stand that branches in different directions like a tree.

This element is left like a cut-off stalk at the base of the chandelier. But for the other lights, Carbonell created lumpy bases by cobbling together materials he found in his studio, like mesh, paper, metal and silicone. One of these lamps is raised on top of a table to create a furniture piece with dual purposes.

"We start creating the sediment stone on a square block," Carbonell told Dezeen. "We crack [it] and that's the seed from where the shape starts coming from, then welding the trunk and branches where the mesh bubble grows."

Carpenters Workshop Gallery, which represents Carbonell, is modelling its booth at this year's Armory Show on the designer's Eindhoven studio. The new lights will be displayed on a workshop table, alongside the his tools, models, found objects and unfinished designs.

"A cite of utility and experimentation, the workshop table serves as a 'cabinet of curiosity' where the past, present and future of Carbonell's studio intersects," said the gallery, which is exhibiting for the first time at The Armory. "These 'amulets' are both signposts, seeds from which new ideas, new objects, new collections grow, and the artist's companions in the creative process."

Light Mesh follows a host of designs by Carbonell made with unconventional shapes and materials, including tables and chairs covered in gravel and thorns, and furniture with a stretchy elastic skin.

He is among a host of contemporary artists represented by Carpenters Workshop Gallery, which has locations in London, Paris and New York, and recently exhibited Wonmin Park's patinated aluminium furniture and Mathieu Lehanneur's Liquid Marble table series.

Carpenters Workshop Gallery is exhibiting in Booth 912 at Manhattan's Pier 92 and 94 as part of this year's Armory Show, which is taking place from 8 to 11 March 2018. The gallery will also have a presence at the Collective Design fair, which was moved this year to coincide with the art festival. 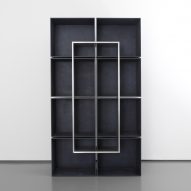 More from the Carpenters Workshop Gallery