American designer Shepard Fairey has produced a pair of posters protesting gun violence in US schools, coinciding with nationwide demonstrations.

Fairey released the posters to be used during walkouts and protests staged by students across the country yesterday, 14 March 2017, in an attempt to pressure the government into passing tougher gun legislation.

Free to download, both designs incorporate AR-15 assault rifles into their graphics. On the first, the weapons and bullets are arranged as a flower-like motif around a peace symbol, with text reading "schools not warzones" in red against a yellow background.

The second features the silhouette of a single rapid-fire device, accompanied by the words "an assault on our future" and surrounded by a border of chains.

Both are formatted as 18 by 24-inch (46 by 61-centimetre) posters, and also available as square versions.

Yesterday's protests took place exactly a month after a teenager killed 17 students at Marjory Stoneman Douglas High School in Parkland, Florida – the latest in a string of similar gun-related incidents across the US in recent years. 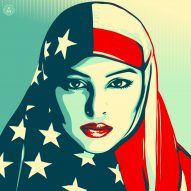 Thousands of young people participated in the walkouts, which were organised by the group behind the National Women's March and took place for 17 minutes at 10am.

Fairey has become known for his politically charged artworks, after his campaign poster for former US president Barack Obama was widely praised and named Design of the Year in 2009. He then adapted the now-iconic graphic to represent America's minority populations when Donald Trump was inaugurated last year.

The latest designs join a series that are available to download from the website of Studio Number One, which Fairey founded in 2003.