The stove is part of a range of environmentally friendly wood burners by Vuurs, a Dutch start-up founded by Bram Opdam.

The company tasked Amsterdam-based Tjep with coming up with a design that would modernise the traditional stove and celebrate its technological features.

"[Vuurs wanted to] move the wood stove from something of the past to something that can integrate into a contemporary context," Tjep founder Frank Tjepkema told Dezeen.

The designer began by looking at the shape of traditional stoves, then stripped this back to create a more minimal design.

Generally, stoves are made from a dark-coloured solid metal, often cast iron or steel, and feature a closed firebox where the wood is set alight.

Instead, Tjep chose to employ a light colour palette to the Vuurs stove, combining shades of soft grey and off-white. 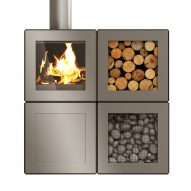 A V-shaped window offers a view of the fire, while four wooden legs raise the stove off the floor. A handle used to open up the front of the heater was swapped for a button.

"Typically these types of stoves are heavy and look bulky in an interior," Tjepkema said. "Elevating the stove on four legs makes the stove look light but also prevents heat from dissipating into the floor."

Tjepkema also wanted to reflect the technology and innovation used by Vuurs. The stove is equipped with Internet of Things technology that tracks heating data, and is also able to charge mobile devices by converting the thermal energy produced by the fire into electricity.

"It is actually possible to recharge mobile devices off the heat generated, but also to establish a Wi-Fi connection for the stove to communicate with the Vuurs server – enabling all kinds of data analytics in the same way Nest does with thermostats," the designer said.

Traditional wood-burning stoves are thought to let off high levels of carbon dioxide that can contribute to widespread pollution and health issues.

The topic has been much-debated of late, with some countries imposing clean air zones and restrictions on when stoves can be lit.

Last year, London mayor Sadiq Khan proposed a ban on the heating systems in the UK capital, while in 2015 the US Environmental Protection Agency banned the production and sale of 80 per cent of the country's wood-burning stoves currently on the market.

However Vuurs claims its stoves produce emissions "far below the most stringent standards".

Tjepkema founded Tjep in 2001. Since then, his studio has completed a number of projects ranging from skeletal furniture made from bronze to tables based on the shapes of a genetic code. 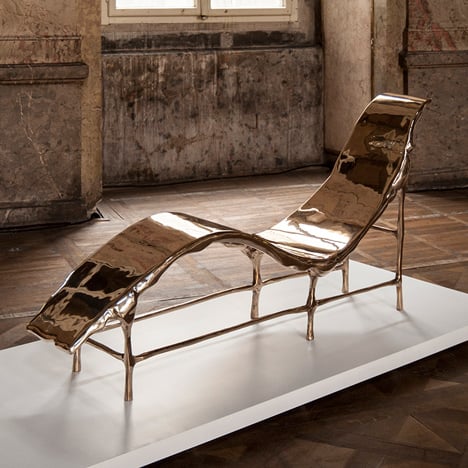