Luxury watch brand Hublot has released its first smartwatch, which will be worn by referees at the FIFA World Cup in Russia this June.

The smartwatch, named Big Bang Referee, was designed for the FIFA World Cup 2018 at the request of the organisers and will allow referees on the pitch to connect to the video referee.

"Wanting a customised watch for the referees, FIFA asked Hublot to conceive the perfect watch to accompany them on the pitches during the matches," said a statement from the company.

Hublot, the official timekeeper for this year's World Cup, produced the smartwatch as controversial video-assisted referees (VAR) are set to be used at the tournament for the first time.

It will allow referees to communicate with the video assistants, which are used to confirm whether or not the ball crossed the goal line.

"The referees' watches will be connected to goal-line technology, an electronic video assistance system for refereeing which follows all the trajectories of the ball and determines for certain if the ball did or did not entirely cross the goal line," said a statement from the company.

The watch's design is based on Hublot's existing Big Bang series, featuring a kevlar insert and a bezel decorated with six H-shaped screws. 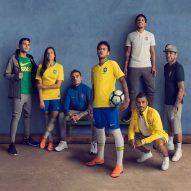 However, its dial is slightly thicker than the standard Big Bang model in order to contain the electronics needed for internet connectivity.

Designed with football fans in mind, the watch also comes with a range of World Cup-related functions. The smartwatch will send a notification 15 minutes before each of the matches begins and will also alert users to goals, and red or yellow cards.

During games, the watch face will display match statistics. If a team scores, it will vibrate and show the word "goal".

"The Big Bang Referee 2018 FIFA World Cup Russia offers all the usual features of a smartwatch of course, but that's not where Hublot has applied its innovation and audacity. It brings together everything that inspires the passion of football lovers!," said Ricardo Guadalupe, CEO of Hublot.

"The FIFA World Cup is the Holy Grail of emotions for football fans, so just imagine what an object such as a watch that captures each and every one of its moments, its turning points, its stakes could suddenly represent? The football aficionados from among the brand's friends have been waiting for this watch for a long time," he continued.

A limited number of 2,018 of the smartwatches are available to mark the year of the tournament. Reportedly priced at £3,700, they come with two straps and a range of dials in the colours of each participating nation. A range of custom straps are also available.

Hublot is the latest company to have released a smartwatch. Danish brand Skagen unveiled its first touchscreen smartwatch earlier this year, while Fitbit launched a device aimed at rivalling the Apple Watch in 2017.

The 2018 FIFA World Cup kicks off on 14 June. The 64 matches will take place in 12 stadiums across 11 host cities, all in the European part of Russia.

The final is scheduled to take place on 15 July 2018 at the Luzhniki Stadium in Moscow.