The circular logos, which feature drawings of elephants and sharks made up of contour lines, are used across business cards, clothing and vehicles belonging to the Leonardo DiCaprio Foundation (LDF).

Founded by Hollywood actor Leonardo DiCaprio in 1998, the LDF was set up with the goal of safeguarding both wild animals and their habitats.

The Lion Recovery, Shark Conservation and Elephant Crisis funds are three separate funds recently launched by the foundation in order to protect these animals.

"Having worked with Superfried before, they approached me to develop the identity for the remaining two," said graphic designer Mark Richardson, director at the Manchester-based studio.

"The marque for the first fund featured a lion's head formed from contour lines. They stated it was important to continue the idea of conveying both the species and their habitat for the two additional funds."

For the Shark Conservation Fund, which was set up to protect not only sharks, but also rays, Richardson created a circle-framed logo design that features a shark swimming alongside a ray. One of the ray's wings also doubles as the shark's main dorsal fin.

To differentiate the two sea creatures from one another, the shark is set in a solid colour while the ray is defined through the use of negative space alone.

"The client requested, that if possible, the identity should simultaneously represent both species and their natural habitat," said Richardson. "With this in mind I looked for similarities in the form of both rays and sharks. Likewise to convey their habitat, waves and their fins were conveniently close in shape."

The marque for the last of the three projects, the Elephant Crisis Fund, is also enclosed within a circle and shows both an elephant's profile and its habitat through the use of map-inspired topographic contours. Their environment is conveyed via close-up shots of elephant skin, proposed for potential marketing material.

"Close-up shots of their skin bore a striking resemblance to parched landscapes," said Richardson. "The patterned skin of rays and sharks was also employed to highlight their almost surreal, beautiful and incredibly diverse markings – often praised for land animals, but regularly overlooked for creatures of the sea."

Last month, French clothing brand Lacoste swapped its distinctive crocodile logo for one of 10 threatened animal species on a series of polo shirts to highlight the global state of biodiversity.

The limited-edition collection provoked a mixed reaction in the Dezeen comments section, as readers debated whether the initiative was a demonstration of Lacoste's corporate responsibility or if it was simply a case of greenwashing. 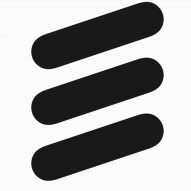