OMA partner Ippolito Pestellini Laparelli explains how the firm explored "a fascination with point, line and surface" to create a lighting system, in this movie Dezeen produced for Delta Light.

The XY180 collection, which Delta Light first unveiled during Milan design week last year, is a modular lighting system designed around a hinged fixture that allows a range of different luminaires to be connected together.

The lighting elements comprise tube lights of different lengths, as well as spotlights in two sizes, which can be combined in a variety of different configurations.

"This is the first time that OMA has designed a lighting product with a very strong and specific identity," says Laparelli, a partner at the Rotterdam-based architecture firm led by Rem Koolhaas.

"It is based on a fascination for very essential geometries – probably the fundamentals of geometry – a point, a line and a surface."

Laparelli worked with a young architect called Laurence Bolhaar and a product designer called Antonio Barone to develop the design.

"We didn't want the luminaire to be just an object, we were aiming for something that could perform," Bolhaar explains.

"For that reason we were looking for something that could move, that could swivel and turn. That's why we started working with the hinge."

The larger, more powerful spotlight element is encased in a metal cylinder, reminiscent of a chunky hand-held torch. It is covered in spikes, which Bolhaar says led to it being nicknamed "the Punk". 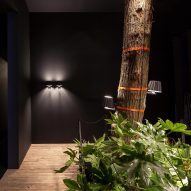 Arik Levy's Butler lights can be made to look like mushrooms

"We have the small spotlight in the tube light, and they are very elegant," he explains. "But we also wanted to add a bold statement and a bit more of a punch, so we added the cylinder with the spikes that we call the Punk."

XY180 is designed to work as a standalone lighting fixture, but also to arranged in a series to create custom geometric patterns.

"This is a product that has a very strong individuality," Laparelli says. "But at the same time, when it is assembled in groups or in a series, it can really transcend the scale of product design into architecture."

OMA's design team in Rotterdam worked closely with Delta Light's engineering team based in Wevelgem, Belgium to develop the design, which Laparelli describes as "a very osmotic process".

"We used the expertise of our engineering team to translate the creative ideas of OMA into a commercial product," Delta Light's research and development manager Peter Ameloot explains.

"For us it is important to make a product that can be sold on a frequent basis and is not a one-off sculpture."

Ameloot says one of the challenges his team had to overcome was to fit a lot of complex lighting technology into the slim form of the lights.

"The product looks quite simple, but in fact it is a complex combination of a lot of parts," he says.

"The requirement was to have good diffused light, enough light output and still enough strength inside the tube so everything would remain one horizontal line."

The XY180 was officially launched on the market at the end of last year and Ameloot is confident that the flexibility that the modular design affords architects and designers will make it a popular product.

"We believe the future of the XY180 will be a bright future," he says. "The product allows creativity to the designer and in this way it can become a classic in the Delta Light range."

Dezeen produced this movie for Delta Light. It was filmed at OMA's offices in Rotterdam, the Netherlands, and Delta Light's headquarters in Wevelgem, Belgium.