Homeware brand Hay and electronics specialist Sonos have combined their expertise to create a collection of limited-edition speakers, which they say "deserve to be treated like furniture".

Launching at Milan design week today, 17 April 2018, the collaboration sees the small Sonos One speaker reimagined in a colour palette developed by Hay.

The limited-edition collection is designed to fit within different home environments, with a range of colours chosen to suit a range of interiors.

"For me, colour is one of the most important tools in the design process, and it was very important we didn't just create a colour scale that looked beautiful," said Mette Hay, who is a judge on this year's Dezeen Awards panel.

"Colours can hide completely and disappear or provide contrast – creating ranges in more colours produces more impact and opportunities for mixing items in the home," she continued.

"These speakers deserve to be treated like furniture; strong, independent objects that can blend in or stand out – functional accessories for any room that fit different needs and different spaces."

The speaker features a simple and minimal form. Buttons sit flush to the surface, and a single white light signifies when the device is powered up.

"With Hay, a company whose work we greatly respect and whose design philosophy is aligned with our own, we found a partner with whom to explore the evolving role of sound as an architectural element in the home," said Sonos' vice president of design, Tad Toulis. 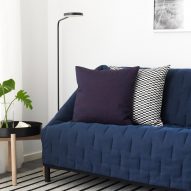 The Hay for Sonos Limited Edition collection will work on Apple's AirPlay2 system, meaning it can be wirelessly hooked up to televisions, smartphones and other audio devices around the home.

When it launches later this year in September, the speaker will cost $229 (£160). It will be available from Sonos' flagship stores and Hay House in Copenhagen.

The two companies reveal the results of their collaboration in an exhibition at Palazzo Clerici for Milan design week, from 17 to 22 April 2017.

Along with co-working company WeWork, Sonos and Hay are using the installation to present their collaborative visions for the future of design and how it will affect the living space. 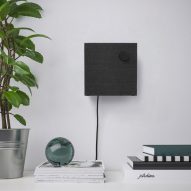 Hay largely pioneered the trend for furniture brands launching accessories, when it began selling smaller-sized pieces in 2008. The brand has also recently collaborated with IKEA on a collection set to launch in October 2017, and more recently worked with chef Frederik Bille Brahe to release a collection of kitchenware, including pots, pans, sponges and cups.

The company, founded by husband and wife team Rolf and Mette Hay, ranked at number 46 on Dezeen Hot List – a data-based power ranking of design and architecture's biggest names.