The mid-century-modern architecture of a nearby Marcel Breuer residence provided cues for a family home by Hufft Architects in the American Midwest.

Encompassing 6,500 square feet (604 square metres), Baulinder House is located in Mission Hills – a residential neighbourhood of Kansas City, on the Kansas side of the state border. The home was built near a project by well-known Bauhaus architect Breuer, who was renowned for his modernist approach and aesthetic.

Simple rectangular volumes combine to form the overall massing of the new home. "The house's simple form was conceptualised as a series of stacked boxes, with public spaces residing on the ground level and private spaces in the boxes above," Hufft said.

On the ground level, the U-shaped plan partially encloses a courtyard, which allows living spaces to extend outdoors. The entrance is at the centre of the home, next to the garage.

The southern portion of the building encompasses storage areas and a cabana for a family pool to be built at a later date.

To the north, the architects laid out a longitudinal band containing a library, which is separated from the kitchen, living and dining room by a staircase.

"Floor-to-ceiling south facing windows in the courtyard are shaded by the overhanging second floor above to prohibit solar heat gain, but allow for passive solar heating in the winter," said Hufft.

The partial upper level contains the home's three bedrooms. The stair's upper landing was designed as a play loft for the owner's children, and is adjacent to a small study.

One leg of the orthogonal plan is occupied by two children's bedrooms, while the other contains the master suite. All bedrooms have access to an exterior terrace.

The balcony accessed from the kids' rooms runs along the front facade and connects the two. For the master suite, a wraparound terrace extends the bedroom, and overlooks the pool and courtyard. 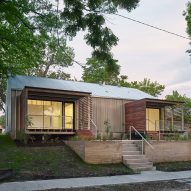 Wood was chosen as a prevalent material for the interiors. It is used for floor finishes, and built-in elements like a screen wall separating the kitchen from the living room, and the library's shelving.

The material was also used for the exterior cladding, alongside black panels. Vertical batons along the exterior terraces create a pattern on the facade.

Kansas City straddles the border between the states of Kansas and Missouri. Other residential projects nearby include a low-income apartment building designs by Kansas State University students and a home on a slope that wraps around a sunken courtyard by local studio El Dorado.

Photography is by Mike Sinclair.