Robots have finished 3D printing the structure of a steel pedestrian bridge devised by technology startup MX3D, which is set to span a canal in Amsterdam.

Dutch designer Joris Laarman is working with with Amsterdam-based robotic manufacturing technology start-up to build the 12-metre-long bridge, which will eventually cross a canal in the Dutch capital.

Six-axis robots were used to "draw" the 4-metre-wide structure in the air from layers of molten steel.

Engineering firm Arup and researchers from Imperial College London are due to perform several full load tests to prove the structural integrity of the bridge, which is being printed inside a former shipbuilding hangar.

The first informal load tests were conducted during a party held to celebrate the milestone, and the team reported it "performed well".

MX3D aims to have finished the printing, placing the deck and coating the bridge by October 2018 – in time for Dutch Design Week. 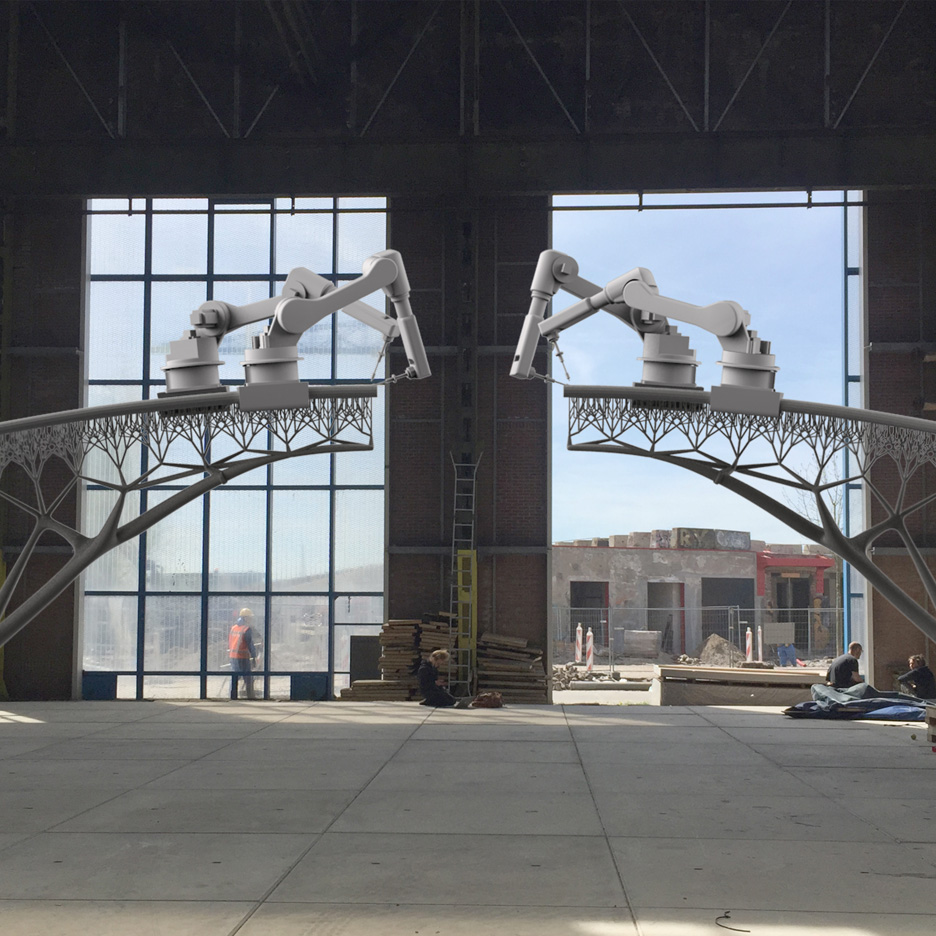 It is expected to be installed on the Oudezijds Achterburgwal in Amsterdam's red light district once the renovation of the canal is complete.

Mathematicians from The Alan Turing Institute, the Internet of Things specialists, and engineers will work with MX3D to deploy a smart sensor network on the bridge.

The sensors will monitor the bridge's performance during the load tests and once it is in situ, collecting data such as strain, displacement and vibration, along with environmental factors including air quality and temperature.

Over time the sensor will show how many people are crossing the bridge and at what speed. This information will also be input into a "digital twin" of the bridge, a computer model that responds to the data as it is collected in real time.

The digital bridge can be tested against the physical one, measuring performance and safety and feeding back to inform future 3D-printed metal bridge designs.

Having proven its ability to 3D print large scale metal structures, MX3D has announced it has partnered with Dutch bridge builder Haasnoot Bruggen to bring 3D metal printing to the pedestrian and bicycle bridge market in the Netherlands.

Speaking to Dezeen when the project launched in 2015 Laarman said the technology pioneered in the project could take 3D printing to "a higher level".

Arup and architecture studio CLS Architetti are due to print "Europe's first 3D-printed one-bedroom house" from concrete at this year's Milan Design Week.