The founders of Containerwerk discuss the benefits of building with recycled shipping containers in this movie Dezeen filmed for the German start-up company at Milan design week.

Founded two years ago in Stuttgart, Germany, Containerwerk adapts used shipping containers so they can be used by architects to create living and working spaces.

The company uses an industrial process, invented by Containerwerk co-founder Ivan Mallinowski, to line the steel boxes with a layer of foam insulation. The start-up claims its process is much faster and more efficient than traditional methods of insulating containers.

"Insulation is the big problem with building houses with containers," Mallinowski says in the video.

"If you look at the physics of a container, it is made from steel and steel is a very good heat conductor. We build a special type of insulation. It's a monolithic insulation, made by an industrial process and surrounds the whole container inside without any heat bridges."

The greater efficiency of the foam insulation results in walls that are just 10-centimeters thick, which Mallinowski says is crucial for making the most of the space inside a container.

"We can build very thin walls so that the space in the container is as big as possible," he says.

For Milan design week, the company created an installation on Via Tortona comprising two storeys of stacked shipping containers.

"We are in Milan to show what you can do with containers," Containerwerk managing director Michael Haiser says.

The installation comprised two show homes. The first in a single 40-foot long container on ground level, with a larger apartment above made from two similar containers bolted next to each other.

The interiors for both were furnished with high-end fixtures and fittings to create a sense of luxury and contrast with the industrial exterior of the containers.

"When people look around they say, 'I never thought you could do this in a container,'" says Containerwerk head of design Christine Schaal.

The entire structure was prefabricated in Germany and took two days to assemble on site. Shaal says that the speed of construction is one of the key benefits of using shipping containers in architecture, together with their inherent mobility. 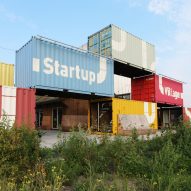 "We have a solution to build quickly," she says. "And I think the younger generations are not interested in building their house and living there for the next fifty years – they are more interested in being mobile."

Mallinowski says that building with shipping containers is also a sustainable construction method.

"The biggest advantage [of using shipping containers] is sustainability, because we only use used containers," he says. "A lot of containers come from China to Europe. If we don't use them, they are thrown away."

Schaal adds: "I like the idea that we don't need to use more and more materials and instead up-cycle existing material. I think this is the most important part of what we're doing."