Taminiau was with Carl Turner Architects during the design and build process for the practice's south London container park, Pop Brixton, which turned an disused plot into a base for events and independent business.

Back in his native Netherlands and having founded Julius Taminiau Architects, he decided to apply the same philosophy of turning a derelict patch of land into a low budget, temporary space for young companies. Startup Village now sits in the Amsterdam Science Park.

Containers, with their portable, stackable and widely available qualities, are currently a popular experimenting ground in architecture. A house made from splayed shipping containers in the California desert was the most read story on Dezeen in 2017.

"The shipping container as a metaphor for a garage in which a lot of big companies had their first office, like Apple and Microsoft," the architect said in his statement.

"By placing all these 'garages' next to each other a dynamic village arises. The startups will inspire, collaborate across sectors, exchange knowledge and produce unexpected and paradigm-shifting creations."

While with Carl Turner Architects Taminiau also worked on an open-source floating house project, gaining knowledge he applied to his own houseboat in Amsterdam.

At Startup Village, up-cycled shipping containers have been arranged around a central square, which can be used for communal open-air events. A covered events space sits at the end of the square, for hosting lectures, networking parties and casual events such as movie nights. 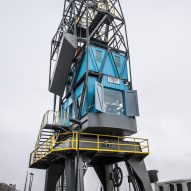 Coffee bars and meeting rooms set in the brightly coloured containers provide further opportunities for "encounters and interaction", and wooden walkways and stairs connect different levels routes through the village.

There are no foundation piles, just concrete tiles that the containers have been placed upon, so when the village is taken apart in 10 years time everything can be reused and no trace will be left.

Glazing has been placed at either end to allow natural light to permeate the containers, and these windows can be opened to allow cross ventilation. For colder days each one has been insulated and fitted with infra-red heating devices.

Greenery has been planted around the square and on top of some of the containers, in collaboration with Green Art Solutions, to make the space more pleasant and act as a rainwater buffer and air filter.

Elsewhere in Amsterdam, Edward van Vliet made a luxury rental apartment overlooking the river by inserting a shipping container into a dockland crane.