My First Pritzker is an animation by Andrea Stinga that reimagines the works of architecture's Pritzker Prize-winners as children's building blocks.

Barcelona-based architect and motion designer Stinga chose one building from each the 40 winners of the prize to animate as children's toys in a satisfying video that romps through 39 years of architectural history.

"I chose one of the selected works for each winner and created the building using simply wooden shapes, like a child's game, to represent them in an iconic and synthetic way so they can be easily recognised."

As the animation runs along a timeline, each prize-winning architect's most famous work has been distilled into simple forms and realised in digital versions of wooden shapes. 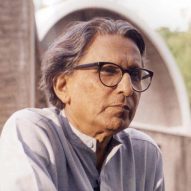 "As a personal project it begun some years ago, with this idea of making a list of all the winners of this incredible prize," explained Stinga.

"In the research I have became acquainted with incredible architects and their awesome work, such as the Emerson Museum of I.M. Pei, the Nordic Villa of Sverre Fehn, The Luxembourg Philharmonie of Christian de Portzamparc and the Pierre Soulages Museum of RCR Arquitectes."

Stinga's piece starts in 1979 with Philip Johnson and his AT&T Corporate Headquarters in New York, the postmodern skyscraper that's recently made headlines as architects protested Snøhetta's plans to replace the masonry at its base with a glass facade.

The short ends with 2018 winner Balkrishna Vithaldas Doshi, represented here by his studio Sangath with its distinctive barrel-vaulted roofs.

Norman Foster, who won the prize in 1999, is represented by his long and low Sainsbury Centre for Visual Arts, while Jean Nouvel, who won in 2008, is presented as the tall Barcelona tower.

For Jørn Utzon, the 2003 winner, Stinga chose his magnum opus, the Sydney Opera House, whilse 2004 winner Zaha Hadid's is represents by the Richard and Lois Rosenthal Centre for Contemporary Art.

"My First Pritzker summarises, in an original and short way, 39 years of this reputable prize. It's very valuable information that any architect or [architecture] student should know," added Stinga.

"I hope this video will help spread it all over the world and be seen by many people from different fields and professions, so they can enjoy it as much as I have doing it."

Art direction was by Federico Gonzalez. The animation was modelled in Cinema 4D and composed in After Effects. The music is synthesised percussion, based on Suite for Piano Toy by John Cage,