Cantilevers and setbacks define the elevations of this vacation housing complex, designed by Chilean studio Mobil Arquitectos for a gently sloping site in a coastal village.

The project, called 12 Cachagua, is located in the mountainous Valparaíso region, about 180 kilometres northwest of the capital Santiago. Situated in the centre of a beach town, the 2,470-square-metre development encompasses a trio of structures that are embedded in a shallow hillside.

"To fit with the scale of the context, the building develops towards the slope, with the least possible impact on the street level," said Mobil Arquitectos, a firm based in the commune of Las Condes, just outside of Santiago.

Rather than creating simple boxes, the team devised elevations that step forward and back. On the street-facing side of the complex, the bottom and top levels are recessed, while the second floor pushes outward. 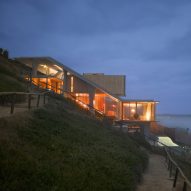 Exterior walls are wrapped in finger-joint pine and large stretches of glass, offering generous views of the mountains and sea. The same blonde wood was used indoors in order to create a "warm and relaxed atmosphere".

The complex contains 12 townhomes, each rectangular in plan. In the centre of each building is a landscaped courtyard with a stairwell. The project also features a shared swimming pool and two dozen parking spots. Every unit has been sold, according to the team.

Other projects in Chile's Valparaíso region include a blackened pine cabin by architect Gonzalo Iturriaga that provides refuge for a mountaineer, and a low-cost seaside complex by architects Alejandro Soffia and Gabriel Rudolphy.

Photography is by Nico Saieh. 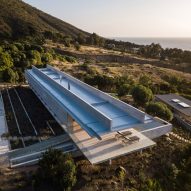