This competition is now closed. Congratulations to the winners, which are Rebecca Smith from Zurich, Switzerland; Luciano Vitiello from London, England; and James Kiernan from County Kildare, Ireland.

Mies in London is a 160-page hardback book published by REAL (Real Estate Architecture Laboratory), a cultural institute and publisher founded by Jack Self, that aims to offer a glimpse into Mies van der Rohe's unrealised office block in London.

Commissioned for the City of London in 1962, the 19-storey-high, amber-glass tower would have been Mies' only building in the UK were it not thwarted by a campaign against it and eventually dropped in 1984.

For Mies in London, REAL has pulled together archival material, including drawings, model photographs and collages, as well as letters written by the architect, sourced from institutions and private collections, such as RIBA, the Canadian Centre for Architecture (CCA) and Drawing Matter.

These images take up full pages throughout the book, with short descriptive captions placed underneath. 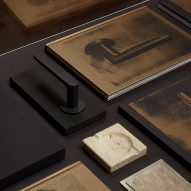 "Mies in London is REAL's longest-running and most complex project to date, taking three years in as many continents," said Self, who edited the book alongside Yulia Rudenko.

"No expense was spared in making one of the most comprehensive projects about any of Mies' works," he added.

London-based studio OK-RM designed the bronze cover of the book as a reference to Mies' design. Black imprints of the ashtray and door handle that the architect had produced for the tower are then laid over the top.

REAL has also worked with ironmongery designer Ize to produce a limited run of these two products to mark the release.

Mies van der Rohe's Mansion House Square was also the subject of an exhibition at the Royal Institute of British Architects last year. The building was under development for more than 20 years, before it was abandoned following a long campaign by Prince Charles.

Mies in London is also available to purchase online for £70.

Photography is by Mies in London, courtesy of REAL.