Munich-based designer Saskia Diez has created a range of earrings to represent football formations that will be seen at the 2018 FIFA World Cup in Russia, which begins on 14 June.

Diez made 11 styles of earrings that each represent a football team's formation – the arrangement of its players on a pitch. Each of the players in the formations is represented by a pearl.

"The idea was to create jewellery that is based on soccer, with the World Cup coming up," Diez told Dezeen. "I decided to relate them to the beauty of sports, of strategy, of historic sports moments that move and unite so many people."

Each piece of jewellery is made with 11 freshwater pearls, that represent the 11 players, held together on an 18-karat gold chain.

Diez explained three of the most common formations to Dezeen. The first piece represents three-four-three formation, which has three defenders, four players in midfield and three forwards. "It is the preferred soccer formation of Barcelona and AC Milan in the 1990s that evolved from the four-three-three," Diez explained.

"It looks very offensive, with only three players left to defend in front of the goal. However, midfield and backline can work well together on defence, especially when the ball is near their goal," she continued.

Another piece is based on the three-four-three diamond, where the four midfield players are arranged in a diamond formation.

"A variation of the three-four-three, with a midfield diamond that narrows the center, [this formation was] played in the UEFA champions league in 2017 by Barcelona, with Messi on top of the diamond," she said.

"The three-four-three has a three-man backline that is very strong against central attacks but can give space to the opposition down the flanks." 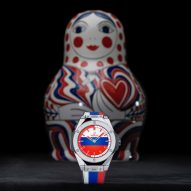 The five-three-two earring has a row of five pearls in the defence, with three central midfielders and two strikers.

"The key players are the fullbacks: they primarily defend the flanks but also give width to a team's offence by providing support from the sides," Diez explained.

"Of the three midfielders, one is positioned in front of the defence to perform defensive tasks. The two others play a more offensive role. One of the most remarkable teams that played with this formation is 2002 World Cup champions Brazil, which played an offensive five-three-two relying on its able fullbacks Cafu and Roberto Carlos."

The collection also features eight other formations that are likely to be played by the teams at the FIFA World Cup, which kicks off 14 June, at the Luzhniki Stadium in Moscow.

Diez's pieces will be launched at Pitti Immagine Uomo 94 in Florence, between 12 and 15 June.

This year's FIFA World Cup will feature 64 matches in 12 stadiums across 11 host cities, all in the European part of Russia. Other designs related to the event include the official poster, which has legendary Russian goalkeeper Lev Yashin as its focus.

Sportswear brands like Nike has designed kits for competing countries, including France, Brazil, England and Nigeria, with Adidas creating kits that pay homage to classic football shirts for teams including Germany, Spain and Argentina.