Colourful ridged-glass cleaning bottles, a black broom and a red washing line are among the tools for cooking, cleaning and organising created for a New York exhibition based on the American Shaker movement.

Furnishing Utopia 3.0: Hands to Work presented over 50 objects for daily chores during this year's NYCxDesign festival, marking the third installment of the Shaker-influenced series led by design collective Furnishing Utopia.

Developed in collaboration with retailer Design Within Reach, the project has previously produced works that reinterpret historic designs by the Shakers – a religious sect known for its simple furniture and architecture made in the late 19th century.

But this year, rather than emulate designs, the 26 contributing designers and studios were asked to respond to the simple daily lives of Shaker members, who considered the completion of daily household activities like cleaning and cooking "as a path to enlightenment".

"Chores are conventionally understood as tedious, burdensome work to be avoided, but these activities can also have an association with mindful rituals that have the potential for clearing one's mind, connecting with one's body, and confronting the indifference of the natural world," said a statement from Furnishing Utopia.

Among the designs in the collection is the All Purpose Set by French-American designer Sophie Lou Jacobsen, which comprises a six containers for storing products for cleaning. Jacobsen's set includes two sprays and a bottle with a round, wooden cap, all of which feature ridged glass to make them easy to hold. There is also a pouring jug and a container topped by a funnel.

A black broom by US designer Christopher Specce, which is detailed with a red tie around its bristles, a glass watering can by Daniel Castillo and a series of handheld brushes by Henry Julier are among the other designs for cleaning. 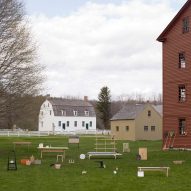 Shaker style is back again as designers celebrate "the first minimalists"

The pared-back designs of the household items in Hands to Work echoes the minimalist style of the Shakers that has recently become popular with designers. Neri&Hu, Jin Kuramoto, Torsten Sherwood and Pinch have all recently referenced the movement.

Featuring a similar aesthetic in Hands to Work are a wooden board and a mortal and pestle for chopping and grinding herbs, by American design brand Fin. These cooking tools could be accompanied in the kitchen by wooden paper towel holder by Norwegian designer Stine Aas and a dish rack by Helsinki-based Studio Tolvanen.

Kitchen tools can also be hung from the red, wooden rack that German designer Katrin Greiling created to also be used to partition rooms. A number of other designs are intended for organising the household, like a set of black storage drawers, a set of cork baskets and two different buckets.

Canadian designer Jamie Wolfond, founder of Brooklyn-based design studio Good Thing, created the Wandering Planter – a plant pot that is set on wheels so it can be easily moved around.

A round stool by Danish studio Norm Architects provides a perch for completing tasks low to the ground, while Oregon-based designer Tom Bonamici responded to the brief with his dark Chore Coat to protect clothing when completing messy tasks.

Other contributors include the exhibition's creative directors, Brooklyn-based Ladies & Gentlemen Studio, which designed a striped brush with a domed handle and a soap set, including a bottle holder and a soap tray.

Furnishing Utopia 3.0: Hands to Work took place from 19 to 22 May 2018 at 158 Mercer Street, as part of the citywide NYCxDesign festival.

Other highlights from this year's event included an indoor garden that Ladies & Gentlemen Studio created for design brand Muji, a pop-up restaurant built from recycled food packaging and an installation of rotating mirrors erected in A/D/O's courtyard.