Copenhagen's showrooms threw open their doors last week for 3 Days of Design, with many brands announcing fresh reissues pulled from the Danish design archives. Rose Etherington picks 10 of the best midcentury pieces that are now back in production.

3 Days of Design is Denmark's annual design showcase. This year's event took place from Thursday 24 to Saturday 26 May 2018, with nearly 100 exhibitors welcoming visitors to discover Danish design at showrooms, galleries, residencies, studios and embassies across the city.

With the growing resurgence of interest in reviving pieces from the past and so many Danish brands boasting archives full of design classics, several of those headquartered in the city took the opportunity to show off their latest reissues.

Designers were ahead of their time

In some cases, companies are finding that the design masters of last century were so ahead of their time that only now, through modern technology, is it possible to manufacture their designs in significant numbers.

One such example is new brand PH Furniture, founded this year specifically to produce furniture pieces from Poul Henningsen's drawings, which manufacturers were never able to make during his lifetime. 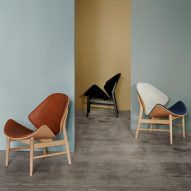 Other brands are digging into the archives and discovering that changing ways of living – particularly the tide of high-end residential spaces built with ever smaller footprints – can bring new relevance to designs that had previously fallen out of favour.

Carl Hansen & Søn, for example, has revived a sofa and lounge chair by Hans J Wegner with unusually compact dimensions for the designer's work. "Both the lounge chair and sofa speak to a very contemporary home trend that celebrates the compact residential property in large towns and cities, where space is often limited," explains CEO Knud Erik Hansen.

Similarly, one of the latest archival designs to be revived by Danish producer Gubi is the C-Chair by French designer Marcel Gascoin. His socially minded approach in much of his work was to make up for the lack of space in the new sizes of homes built after the second world war by creating simple, functional furniture.

This approach to design for the masses is now taking hold in the high-end furniture market, where customers are still looking for quality of design and manufacture, but on a diminutive scale and with practical use of space at a premium.

The trend was also visible at Stockholm Design Week back in February, where exhibitors included new Scandinavian brands Fjordfiesta and Warm Nordic, both set up specifically to bring furniture from their design heroes to a new generation.

Here's our pick of the latest crop of designs to be dusted off, put into production and presented in Copenhagen last week:

With unusually compact dimensions and a slim upholstered frame, this lounge set features armrests that finish in solid wooden handles. Both the chair and sofa had been out of production since the 1970s, when more luxuriously oversized seating became fashionable.

The brand's founding designer originally took inspiration from the wide armrests of chairs he found while travelling in southern Spain. Pulling out this version from its own archives, the Danish producer simply raised the seat height of the dining chair to meet today's standards.

Constructed from one snaking line of chromed steel tubing with seats in wood or leather, these are among 16 pieces of furniture reproduced from Henningsen’s blueprints and drawings by the newly formed PH Furniture, operating under license from his family's estate.

The Danish brand presented reissues from multiple designers, dotted around the new co-working space set up by distributor Better, including this lamp with a clear glass diffuser shaped by arched ridges and rounded ends reminiscent of the architect's buildings.

This lounge chair, featuring a single piece of leather laced together over a solid wooden frame, was the designer's personal chair that he chose to relax into after a long day. Only three were made originally, with one of them going to King Frederick IX of Denmark.

Danish architect Bodil Kjaer is enjoying a renaissance at the moment, with multiple brands bringing her past work into their collections. One example is this lamp with a base made from clean-cut clear acrylic panels, slotted together like a puzzle under an opal acrylic shade.

Gubi's success is built on combining selective reissues with carefully chosen new collaborations. This rediscovered chair was created for the compact new homes of postwar France, combining a sturdy solid wood frame with lighter seat in cane, straw or fabric.

The Copenhagen brand, founded by Sarfatti's grandson, is now distributing his lunar-inspired lights under license from Flos, which acquired all of his designs in 1973 but were not producing them. It boasts opaline glass spheres held in place by painted aluminium rings.

Previewed at a pop-up factory showing the process behind Poulsen's best-known products, the PH 3/2 table lamp features three shades of varying angles. It will be reissued in a limited run this autumn in the same coloured glass that was used in the 1920s.

Early in his career, proponent of the Danish Modern movement Børge Mogensen headed up the design studio at FDB Møbler. This revived design, based on traditional Windsor chairs, was out of production from 1980 when the firm sold the rights and stopped production.