Danish furniture producer House of Finn Juhl has relaunched a sofa created by the renowned furniture designer for his own home in 1945.

The Little Mother Sofa is one of the lesser-known furniture designs developed by Finn Juhl, who was responsible for iconic pieces such as the Chieftain Chair and Pelican Chair.

House of Finn Juhl, which owns the exclusive rights to reproduce the designer's furniture, based the reproduction on Juhl's original drawings.

It is thought that only a few copies of the Little Mother were made and it has not been in production since it was first designed.

Describing their reasons for relaunching this particular design, House of Finn Juhl's founders Ivan Hansen and Henrik Sørensen said they find the design "beautiful and extremely relevant in a modern context."

"We are very much looking forward to adding another piece to our Finn Juhl range," the company added, "even more so one that has been in hibernation since 1945."

The sofa comes in two lengths and features a slight inward curve at its centre, referencing shapes similar to those found in nature.

This design is typical of Juhl's organic take on modernism, and serves to embrace and support the human body in a comfortable but efficient way wherever the user chooses to sit.

Born in 1912, Juhl studied architecture at the Royal Academy of Arts in Copenhagen. He never completed his studies, instead working for the architect Villhelm Lauritzen before founding his own studio.

His most important projects include the interiors of the Danish Broadcasting House, Copenhagen Airport and the Trusteeship Council Chamber at the UN headquarters in New York.

The Little Mother sofa was developed a few years after the better known Poet sofa, a stylised version of which featured in a popular Danish cartoon published in the Politiken newspaper for over five decades. 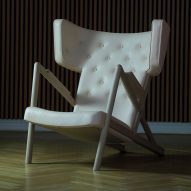 The cartoonist, Jørgen Mogensen, was in fact inspired by a prototype of the Little Mother sofa that was gifted by master joiner Niels Vodder to his daughter Kirsten and her husband, the poet Frank Jaeger.

Mogensen, who visited the family often and observed Jaeger pondering the events of life on his sofa, named his cartoon The Poet and the Little Mother.

As with Juhl's other designs now produced by the company, the Little Mother sofa is made by hand using traditional joinery and upholstery techniques.

House of Finn Juhl has reintroduced several of Juhl's designs since it was given the rights to reproduce his furniture in 2001 by the designer's widow, Hanne Wilhelm Hansen.

Among the items relaunched in recent years is the graphical and organic Grasshopper Chair. One of the original versions of this chair sold at auction in 2018 for €319,000 (£275,000).

The company also reproduced the FJ 136 chair, which it presented in Milan in 2016, before House of Finn Juhl became a separate brand within its parent company, Onecollection.