Penda has designed a residential tower in Tel Aviv, with facades made of modular archways and terraces, which aims to complement the city's legacy of Bauhaus architecture.

Salzburg and Beijing-based architecture studio Penda has revealed plans for the 116-metre-high Tel Aviv Arcades, which has alternating setbacks to provide residents with sunny garden terraces or secluded private balconies.

"When I first walked through Tel Aviv, I was taken by the vividness on its streets and its shores," said Penda co-founder Chris Precht.

"The rhythm of lively plazas, traditional context and modern architecture inspired me and had a deep impact on the design of the building."

Hand-laid brickwork will reference the the masonry found in Jaffa, Tel Aviv's old town, while the repetition of straight lines and curves echoes the 1930s buildings that earned the city UNESCO World Heritage status.

Tel Aviv has the largest number of Bauhaus style buildings in the world, with over 4,000 buildings built in the German art school style as German-Jewish architects sought sanctuary in the city from persecution under the Nazis.

In the city elements that defined Bauhaus buildings in Europe, such as large areas of glazing, were adapted to suit the hotter climes of the mediterranean.

Instead of heat-trap windows, Tel Aviv's Bauhaus buildings feature long balconies that shade the balconies below and are shaded by those above.

Penda looked to this architectural legacy whilst designing the Tel Aviv Arcades in order to create a tower that will gel with the city's aesthetic legacy and can cope with the demands of its climate. 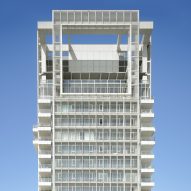 The modular design means that construction costs and disruption can be minimised by prefabricating elements off site, and the structure will be easier to maintain in the long term.

"A high-rise shouldn't be an island in the city without any relation to its surrounding," said Precht.

"A glass tower is the formal illustration of an island without a connection. Its unsustainable in southern regions, it's a bad neighbour as it heats up its surrounding and it lacks a sense of identity," he added.

"Even if we design modern buildings, we believe they should reflect a sense of place and respect its environment, its history and its culture."

Penda aren't the first architects to find inspiration in the Bauhaus designs of the Tel Aviv's White City.

Two different floorplans stacked in a repeating pattern create a tessellation of "cascading" archways that jut out to create entryways to the terraces of each apartment. The terraces wrap around each apartment, providing alternating shady and sunny spots for residents to enjoy.

"We like to think about those large outdoor zones as private yards in the sky with zones where residents can interact with their neighbours," said Precht. "In a way the terraces are a vertical neighbourhood and they reflect the positive atmosphere of the life in the city."

The 18-floor Tel Aviv Arcade will have apartments ranging in size from one to four bedrooms, and the penthouses will have double-height ceilings.

At the foot of the tower a "cave-like" space will house a residents' pool and spa area, with community spaces including a yoga studio and restaurant located on the second floor.

The project is being handled by Penda's Austrian office and is due to begin construction in 2019.

Since being founded in 2013, Penda has developed a reputation for project proposals that carve out clever pieces of outdoor space via ingenious interlocking designs.

Their proposal for a cross-laminated timber tower in Toronto features balconies planted with plants and trees, and their design for a landscaped garden in Hyderabad in India uses stepwells and water mazes to create an engaging community garden.