Called The Colour Palace, the pavilion's colourful exterior draws on the patterned textiles of Dutch prints found in the markets of Lagos and mirrored in Peckham's 'Little Lagos'.

Founded by Dingle Price and Alex Gore, Pricegore architecture studio is based in Peckham, and London artist Ilori has Nigerian heritage. As a team, they drew upon their intersecting backgrounds to create a pavilion that aims to reflect London's multiculturalism.

Set to be built in the summer of 2019, it will be the second pavilion that the Dulwich Picture Gallery has hosted in the grounds of its Grade II*-listed building as part of a collaboration with the London Festival of Architecture.

Ilori and the Peckham studio saw off competition from 150 entries to impress a panel of judges and the public. The jury included writer and broadcaster Tom Dyckhoff, architecture and design critic at The Guardian Oliver Wainwright and founder of Mary Duggan Architects Mary Duggan, who is also a judge for the Dezeen Awards.

Visitors to the gallery during this year's London Festival of Architecture were given the opportunity to vote for their favourite shortlisted design.

Lightweight timber louvres of The Colour Palace will painted in contrasting hues that will produce a colourful pattern of primary shapes. Each side's pattern is painted in a different colour-way, so it will appear to shift as visitors move around the structure. 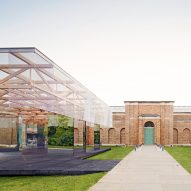 The pavilion will be raised on four plinths formed from precast concrete drainage channels so as to provide unobstructed views of the gardens and the gallery itself, which was built in 1811 by British architect John Soane. It's bright colours are designed to contrast with the 19th century masonry.

A courtyard space inside the pavilion will be used for events such as talks and theatre performances. Stairs lead from the garden to a gantry that runs around the pavilion's perimeter, providing views over the action playing out below.

Pricegore has made the design modular so that after it's time at the gallery the pavilion can be reconfigured, either to create another shelter in a different shape, or to produce several smaller structures.

Last year, for the inaugural pavilion, London-based practice IF_DO constructed a pavilion made partly of mirrored screens that reflected fragments of the gallery and the landscaped gardens.

As part of this year's LFA programme British artist Richard Woods has dumped one of his signature colourful bungalows in a skip, and nine young designers have created playful benches dotted around the city.