Kanye West's discography is portrayed as a set of architectural illustrations in this series by designer Amaory B Portorreal.

Portorreal embarked on the project to visualise each of West's albums as houses after the rapper announced his Yeezy Home venture in May 2018.

The first project from the arm of Yeezy fashion label is expected to be social housing, so Portorreal imagined how the musical and graphic style of the records could be represented as residences.

"Using the musical and aesthetic diversity of Kanye West's hip-hop albums as his reference and inspiration, each home he has created tells a unique story about the possibility of marrying beauty and low-income housing," said a statement on behalf of the designer.

"After hearing that the hip-hop artist was venturing into the world of architecture, and focusing on low-income housing, he decided to envision what these homes could look like."

The result is a series of isometric architectural drawings, set against a single-colour rectangular block and paired with the logo that accompanies the corresponding album.

Working chronologically, Portorreal started with The College Dropout – the debut solo album that catapulted West to fame in 2004.

The house is based on those found in some of the poorest neighbourhoods in Chicago, the city where the rapper grew up. The single-storey, pitched-roof home is depicted in red to match the bear mascot logo on the album cover.

"Excessive materialism, minimum-wage labor and institutional prejudice are prevalent themes that run through this album, touching on Kanye West's humble beginnings," he said.

"The production was much more lush and elaborate, with the use of more sophisticated samples and string orchestration," Portorreal said. "Here, the themes are consistent with those in The College Dropout, but the production is more mature and refined."

For 2007's Graduation, the designer adapted the album artwork created by graphic artist Takashi Murakami. The pastel colours from the imagery are translated into splotches across a domed structure, which features an arched doorway and a porthole window.

"The aesthetic created by Murakami on the cover art draws upon circular shapes and patterns that evoke the image of Japanese Bubble homes," said Portorreal.

The themes of loss and alienation in 808's and Heartbreaks (2008), along with its minimalist sound palette, resulted in a pared-back modernist-looking residence. A series of thin windows along one wall match the pale colours found along the CD spine, and the entrance court is textured to mimic the artwork's heart.

"The cold concrete facade draws on the themes of loss and sadness that run through this album, and the coloured windows draw on each of the complex emotions explored in this album," the designer said.

West's self-exile to Hawaii, to remove himself from the public eye, influenced Portorreal's building to represent fifth album My Beautiful Dark Twisted Fantasy – which was written during this time. Based on a gothic style, a small structure is placed atop a cylindrical tower and cut off by a drawbridge as a "castle in the sky".

"The album boasted an opulent production quality and dealt with themes of excess, consumer culture and the American Dream," Portorreal said.

The patterned golden cover for Watch the Throne (2011) – a collaboration with fellow hip-hop star Jay-Z – was created by fashion designer Riccardo Tisci. This artwork features on a tower at the front of Portorreal's house, set beside a lower, flat black roof.

"The black stone cladded walls of the Watch the Throne house are overshadowed by a large volume wrapped with a golden rain screen perforated by the same geometrical pattern adorned on the album," said the designer.

Similarly, the statuesque woman that appears on Virgil Abloh and Joe Perez's artwork for compilation album Cruel Summer is applied to a wall on Portorreal's corresponding home. This tiered white building features overhangs and a pergola to shade its outdoor areas.

"The Cruel Summer home is a contemporary summer villa with a large motif of a woman on the exterior," said Portorreal.

As the clear Yeezus case was influenced by the simplicity of Braun designer Dieter Rams, so is Portorreal's transparent box house that represents the 2013 album. The two-storey residence, connected by a spiral staircase, also has a red portico to evoke the label that adorns the case.

"The Yeezus home follows this same minimalist agenda with a glass cube with and an entrance with a pop of red colour," said the designer.

Next up is 2017's The Life of Pablo. "Kanye's seventh album The Life of Pablo demonstrated one of Kanye’s greatest talents: his ability to take samples and use them as a tool to switch the beat, introduce the chorus or even emphasise a statement," Portorreal said.

Referencing this idea of repurposing, his house is built from a pair of shipping containers, arranged perpendicularly and stacked one atop the other.

West rewrote his 2018 record Ye in just two weeks at his ranch in Wyoming, after coming under fire for airing his controversial socio-political views. Portorreal therefore set a modest cabin into rocks, like those of the state's Teton Mountains.

"Albeit his shortest album, it is one of his most self-analysing," said Portorreal. "Speaking about his state of mind, his family and how tumultuous his life has been."

"Portorreal used those bended trees, and displayed them as the centrepiece for his Japanese courtyard home," said the designer's statement. 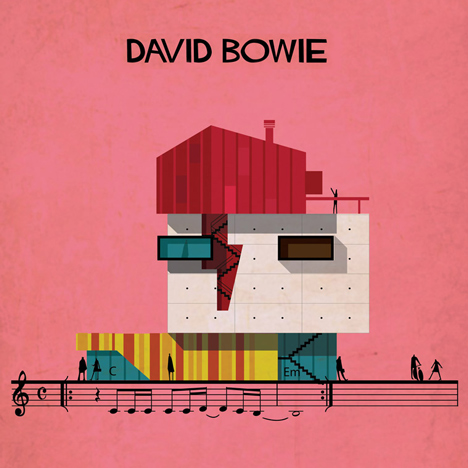 Others that have reinterpreted themes or sets as architectural illustrations include artist Federico Babina, who has created several series of fictional buildings based on sources like architects' faces, famous artworks, classic songs and even the Karma Sutra.