A huge balloon controlled by brain waves will fly around the atrium of the Design Museum during this year's London Design Festival.

Mind Pilot, a project by London-based design studio Loop.pH, will be the first large-scale project to occupy the atrium of the new Design Museum building in Kensington, which opened nearly two years ago.

The "mind-powered airship" will consist of a seven-metre-high balloon encased in a lightweight net, rigged up to a robotic cable system. This system will be controlled by signals received from a headset that reads brain activity.

This headset works through the use of EEG (electroencephalogram) technology, which uses small sensors to pick up electrical signals.

"Mind Pilot is a digitally operated airship, piloted by a single visitor who controls its movement through space with the power of thought, rest and relaxation techniques," said Loop.pH, which is led by designers Mathias Gmachl and Rachel Wingfield.

"The airship is able to fly in multiple directions through a series of cables held by digitally controlled winches that receive signals from the pilots EEG headset," added the studio.

"The project will be a world first in concept, engineering and experiential delivery, and suggests a not-too-distant future where robotics interface with the human mind."

For eight days in September, visitors to the museum will be given the opportunity to put on the headset and control the airship.

The designers think the project will bring transcendental meditation – a method for relaxation and stress reduction – into the museum, as visitors will be able to see the impact their minds have on a physical object.

"Brainwave speed is measured in hertz and they are divided into bands of slow, moderate, and fast waves. Our brainwaves constantly change depending on our actions and emotions/feelings," they said. 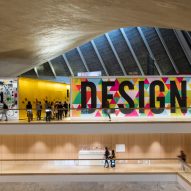 "In general, when slower brainwaves are prominent we can often feel tired, slow, sluggish, or dreamy. When higher frequencies are dominant we can feel wired, or hyper-alert."

The Design Museum's interior was designed by architectural designer John Pawson. Dominated by its hyperbolic paraboloid roof, the multi-storey atrium is the largest space in the building.

It was always intended to be a space for artworks, but very few were present when the building opened – a detail that didn't go unnoticed by critics, including The Observer's Rowan Moore, who described the space as lacking "dynamic interplay".

Since then the space has housed a few displays, including the winners of Dezeen's passport design competition. But it has been unable to host any large-scale installations, largely because the roof is unable to support much additional weight.

The Design Museum has also in the news this week over a controversial event for one of the world's biggest defence companies, which prompted 30 artists and designers to call for their work to be removed from the Hope to Nope exhibition.