The 1970s are back, according to an interior-design report by online furniture platform Clippings.

A return to the louche designs of 1970s nightlife and a revival of marquetry are among the trends emerging from this year's international design shows, says a new report commissioned by the company.

The number one trend identified is a return to the experimental glamour of 1970s design, heavily influenced by disco and the daring arts scene of the time.

This new mood was evident at several presentations in Milan, including a discotheque-inspired collection shown by design brand Gufram and Studiopepe's surreal secret members club. Both of these projects embraced the exuberance of the decade with bold patterns, intense colours and surreal details.

The next trend has designers referencing celestial bodies in flight, moving on from pieces that merely resemble the moon to those that consider the movement of the universe as a whole.

Examples include Lara Bohinc's seating based on gravitational trajectories and Bec Brittain's lighting collaboration with John Hogan, arranged in constellations of brass and glass.

Next, the report announces the resurgence of marquetry in furniture design, showcasing recent, contemporary work that freshens up traditional techniques.

It calls to mind Finsa's Wood in Progress project, where marquetry adds value to MDF and particleboard, and Gabriel Hendifar's exploration of traditional Iranian marquetry for New York brand Apparatus.

The fascination with arched shapes moves from architecture into furniture and accessories, fuelled by recent interest in art deco and Memphis styles.

The Bouroullec brothers capitalised on this with their project for Wonderglass at Milan design week. It also featured at Bar Anne, in the form of an arched colonnade, and on a host of mirrors, screens, lights and wall coverings.

Tactile rugs, wall-hangings and eastern-inspired seating nod, again, to the 1970s, but also reference a broader trend for "cocooning" at home.

Each trend in the 30-page document is presented alongside three stand-out projects and an edit of furniture, lighting and homewares sharing the same inspiration. Clippings also pressed curators, journalists and designers for their take.

"Our editors travel to every design fair and we often see common threads of interest emerging among creators working at the forefront of design for interiors around the world," said Clippings editor-in-chief Rose Etherington. 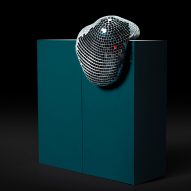 "These can be difficult to grasp if you're consuming design amid all the noise on platforms like Instagram and Pinterest," she told Dezeen. "Often what really catches our attention is a subtle but significant shift in a trend that's been slowly building for some time."

"At this mid-point in the year, we felt it made sense to take stock of the thousands of works we've seen so far in 2018 and draw together the influences that are preoccupying designers into coherent narratives, which we believe will inform interiors over the coming months."

Clippings decided to compile the report after more than 250 interior designers turned up to the company's trends briefing event following Milan design week.

"One of the many ways interior designers bring value to their clients is by connecting knowledge of what's current in the world of design with what's desirable to end users," said Clippings CEO Adel Zakout.

"We've seen growing demand for trend insights among our community despite the increasingly diverse and fragmented market."