Artist Anish Kapoor has called for artists to not shy aware from "real-world questions", and to engage with issues such as nationalism, Brexit and Donald Trump.

"We're all in this terrible, difficult time," Kapoor told Dezeen. "The quotidian questions of our time – in politics especially, but not just in politics – present us with questions we feel we have to answer or find motivation to answer."

London-based Kapoor has been very vocal about recent political events, both in the press and via his Instagram page, where he goes by the name Dirty Corner. Earlier this year, the artist came together with over 200 creatives to form a coalition named Hands Off Our Revolution, which will stage contemporary-art exhibitions to confront right-wing populism.

While the 63-year-old artist said it was crucial not to shy away from these political issues, he acknowledged that the relationship between art and politics is complex. Kapoor warned that art that just "illustrates" political events and acts as only commentary had a short lifespan.

"To me, agitprop – the work that immediately addresses a political question or problem – has a short life," said Kapoor. "You can't do anything else with it. It's fine but not enough."

I call on fellow artists and citizens to disseminate their name and image using Joseph Beuys's seminal work of art as a focus for social change . Our silence makes us complicit with the politics of exclusion. We will not be silent. #americadoesntlikeme

Kapoor was speaking to Dezeen at London's Lisson Gallery, which is currently showing an exhibition of the artist's work that includes a series of new large-scale sculptures. Each of the three artworks is a red fleshy silicone mass veiled with gauze, resembling bursting entrails.

Kapoor said this series resonates because it embodies today's conditions of uncertainty and creates a tension for the viewer, rather than being explicitly political.

"At one level it is fully visceral – it's oily, glowing like fresh blood – and at another level it's quite distanced, it's away from you, it's changed scale," said the artist. "That sense of in-betweeness obviously relates to today."

Later today, Kapoor's sculpture Descension – a giant black whirlpool that descends into the ground – will be unveiled in Brooklyn Bridge Park, after previously being installed at Palace of Versailles in France.

Kapoor said the work and title have an "obvious association" with American politics.

"In New York at this moment, yes descension!" he said. "I toyed with the idea of trying out the title Descension in America to be more particular and to point harder at the current state of things, but I don't think I need to."

Anish Kapoor – ranked the most popular artist in the inaugural Dezeen Hot List – was born in Mumbai in 1954 and moved to the UK in the 1970s, where he still lives and works. He was awarded the prestigious Turner Prize in 1991 and has since had solo exhibitions in major galleries around the world.

He is best-known for his large-scale public sculptures, including the controversial 115 metre-high ArcelorMittal Orbit sculpture in London's Olympic Park.

Olivia Mull: Could you start by giving me a brief overview of the exhibition?

Anish Kapoor: There are three bodies of work: drawings, mirrors and these veiled objects. They are all conversations about painting. Insides and outsides, the possibilities of meaning rather than a direct saying of something.

Olivia Mull: What's the significance of the red colour present in all of the works on show?

Anish Kapoor: I'm obsessed with red and I have been obsessed with red forever. It's the inside of our bodies, it has a kind of psychophysical quality. Red calls to you and yet there's a kind of darkness, which I've been drawn to and continue to work with over so many years.

Olivia Mull: Does this darkness and redness, particularly of these three forms, hold any significance in relation to what is going on in the world today?

I believe that art does that with great difficultly. It is not the job of art to make commentary. However, there is obviously a zeitgeist – a certain shared spirit.

I've always been drawn to objects that have a kind of uncertainty in them. For example in these works, the veil seems to let you in but doesn't quite reveal what is inside. It is that sense that the object is about to move or as if it's about to be in another state.

I think there's something in that, which plays with meaning – a kind of tension. So at one level it is fully visceral – it's oily, glowing like fresh blood – and at another level it's quite distanced, it's away from you, it has changed scale. That sense of in-betweenness obviously relates to today.

Olivia Mull: Do you think an environment of uncertainty is a good and productive space for artists to be working in?

Anish Kapoor: In some ways it is. Our deeper psychic realities seem to be uncertain and there is something in that, which has a correspondence with what we do as artists.

But is it good for art? I don't know. One of the problems for art and artists today is that we are drawn into the commodification of the art object. I think we have to be very careful about what that does to the work itself, it inevitably changes it. Everything is for sale, everything is a kind of object of desire. So, let's make some objects like these that are not objects of desire at all.

Olivia Mull: How do you see your more outwardly politically active work in relation to the kind of work you're presenting in the gallery here? What kind of relationship is there between the two and do they interact with each other?

Anish Kapoor: As you've phrased it, it's a complex relationship. To me, agitprop – the work that immediately addresses a political question or problem – has a short life. You can't do anything else with it. It's fine but not enough.

So, in the same spirit in which you asked the question, I answer it, which is to say that it is complex but we can't shy away from those issues.

Olivia Mull: Is addressing those issues the root of the Hands Off Our Revolution coalition?

Anish Kapoor: Yes I think it is. Let's put it slightly a different way by saying simply this: that every act of affirmation is political. What it says is life force matters, that you will not put us down. Hands off, in other words. What it does is recognise difference, and recognises the possibility that creativity isn't a linear thing.

And it is really important to declare it as a condition of a shared space. This is not nationalism, this is not small-minded and exclusive.

Olivia Mull: Has that changed significantly throughout your career?

Anish Kapoor: Let's say over the last 30 years there's been a very steady growth towards international aesthetic or poetic questions. I don't think that can change.

In the early 80s, when I really started having a career, we were the British sculptors, or there were the Italian painters or the American painters. But we don't think in those terms any longer. I think artists function in different kinds of space.

We're now engaged in a different kind of conversation. Brexit or no Brexit, that I hope can't and won't change. We can't let it change, it's too terrifying. The consequences of going back to some other kind of nationalism is too terrifying.

Olivia Mull: The last question I wanted to ask is about your piece Descension, which is being installed in Brooklyn Bridge Park. Does it takes on particular meanings in New York today?

Anish Kapoor: Yes it does. It had a particular meaning in Versailles. What I was interested in in Versailles was to see if I could go under the skin of the nice, fabulous gardens.

But in New York at this moment, yes descension! At one time I toyed with the idea of trying out the title Descension in America to be more particular and to point harder at the current state of things, but I don't think I need to. It will do its thing, there's an obvious association. 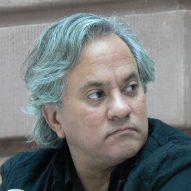