The latest instalment of our Dezeen x MINI Living video series explores a proposal to construct rows of affordable housing on bridges above roads in Sydney.

Architecture and engineering firm NIKA proposes building rows of single-storey houses, as well as a linear public park, above the existing streets of the Australian city.

The series of bridges would be raised 4.2 metres above the roads to allow enough room for traffic to pass underneath.

The modular kit of parts proposed could be used to create a variety of configurations, so structures could be tailored to different localities.

The idea is to reduce the cost of housing by finding unused space that would be cheap to develop, rather than reducing the cost of the fabrication process.

"There is little cost difference between building a house in Washington DC and building a house in the middle of nowhere," Jung told Dezeen. "The actual differentiating factor is land value, so our main focus was developing land that is of no value."

Jung's team believe the system could create affordable housing for young professionals who would not otherwise be able to afford to live within a short commuting distance of Sydney's city centre. 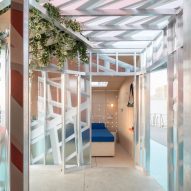 The proposal was developed with the aim of minimising disruption to the existing built environment.

It imagines a series of smaller bridges rather than one long one, allowing gaps that allow natural light to permeate the spaces underneath the bridges. The structures would be angled to cross roads diagonally, allowing them to accommodate up to eight homes each.

Linear public parks, similar to the High Line in New York, would also feature on some of the bridges in a bid to make Sydney greener.

"Green space is a problem in Sydney, because its waterfronts and pockets of park are separated by areas of urban development," Jung said.

"Our buildings will have a really nice green roof. So by using this idea, we can build green spaces sporadically and organically across the city, which will eventually connect the segregated parks."

Bridging Affordable Housing was originally developed for Sydney, but the designers believe it could be deployed in other cities around the world. NIKA is currently in talks to further develop the proposal for both Dallas and Washington DC.

According to Jung, while the technology needed to make the project a reality already exists, changes in legislation would be needed for the plan to be implemented.

"Legislation is a really big thing," he says. "The city controls the development of land that has no value, so the mayor would have to be open to some innovative thinking to open the door."