A subterranean seed bank could be built into the slopes of Mount Kilimanjaro in Tanzania, says Royal Danish Academy of Fine Arts graduate Sean Cassidy, to ensure food crops can be regrown after an apocalypse.

Cassidy's project, Productive Landscapes, proposes the construction of the first seed vault south of the equator, as part of a farming research institute set in fertile farmland on the western ascent of the mountain.

He developed the concept while studying for a masters on the Architecture and Extreme Environments course at KADK, the architecture and design school at the prestigious Copenhagen university.

Over half of Tanzania's population is employed within the agricultural sector, Cassidy discovered in his research, meaning the country's economy is vulnerable to the impact of climate change.

The designer thinks architecture could play a role in safeguarding the industry, creating an archive of crop seeds that could be drawn on in case of natural or manmade disaster.

His vision includes a research and teaching facility set over the underground archive, which would be used to develop and educate on more effective farming techniques.

The world's most famous seed bank is the Svalbard International Seed Vault in Norway, often called the doomsday vault. It is designed to endure extreme environmental conditions, to ensure the future survival of human life. 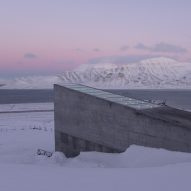 "The importance of the seed cannot be underestimated – it acts as the basis for our everyday lives, what we eat, wear, use and without them," said Cassidy in his project statement.

"It seems crazy to think that this offering is not present in somewhere like Africa, a continent which revolves around agriculture for its livelihood."

"It acts as an insurance policy for the preservation of biodiversity, which at one point if called upon can revitalise and replenish areas in crisis," he explained.

"To further this point – the first withdrawal of seeds from the Svalbard International Seed Vault was made recently by Syria, due to its ongoing devastation."

Climate change is already disrupting the ecosystem around Kilimanjaro, with scientists foreseeing the complete disappearance of the mountain's ice cap as early as 2030.

Cassidy's project follows the lifespan of the facility from the present day to the year 3000, showing how the design could adapt to the changing environment.

The action plan sees subterranean seed vaults embedded in the geologically stable ground in 2025, followed by the construction of a modular building for the agricultural institute in 2030.

Cassidy imagines the demise of the facility by 2500, leaving only the test tube-like seed vaults. By 3000, he thinks Africa will need to draw on their reserves to revitalise its biodiversity.

"At the end of time, the apocalypse if you will, when the land has changed beyond recognition after thousands of years, the seed archives still remain, keeping the items for life to start over, preserved," he explained.

The modular steel-framed research centre shown elevated above the seed stores aims to work with the unpredictability of the site over time, creating a space that is "preserving and evolving in parallel".

The framework could be used to support hanging classrooms or laboratories adjacent to crop fields on the 3,035-hectare farm. Aside from farming methods, the centre would also teach students about accessing credit and markets to help the country to compete with other nations.

Greenery covering the facades could provide shade for the interior space and help with air quality, while the roof could host solar panels and offer a test site for energy companies to trial new products.

"The structure is a trellis for growth, allowing the landscape below to expand and make a very rigid element productive, which then is furthered when you consider that the roof of the building offers the perfect environment for harvesting solar energy," added Cassidy.

Other standout projects from 2018's architecture graduates include a subterranean masterplan for Seoul, an environmentally friendly cemetery for London and a tool for calculating gender bias.