Italian architect Renzo Piano has offered to design a structure to replace the collapsed Ponte Morandi bridge in his hometown of Genoa.

Piano told the Observer magazine it was too early to talk about the particulars of the new design, but that the new bridge must stand as a both a memorial and an embodiment of a "positive moment of unity and cooperation".

The Ponte Morandi, in Genoa, collapsed in bad weather on the morning of 14 August 2018, killing 43 people. A large section of the structure gave way, plunging vehicles down a 45-metre drop.

Piano, the architect behind the Shard in London and the Centre Pompidou in Paris with Richard Rogers, grew up in the city.

"One thing for sure is that it must be beautiful – not in the sense of cosmetics but in conveying a message of truth and pride," said Piano, describing his vision for a new bridge.

"It must be a place where people can recognise the tragedy in some way, while also providing a great entrance to the city. All this must be done without any sign of rhetoric – that would be the worst trap. But I think we will stay away [from that] and instead try to express real pride and values. That is what Genoa deserves."

A 12-month state of emergency has been declared in the region.

Piano said rebuilding the bridge, which was a vital part of Italy's main A10 motorway, is imperative not just because it would restore a major piece of infrastructure but because it would stand as a landmark for hope.

"A bridge is a symbol and should never fall, because when a bridge falls, walls go up. So it’s not only physical but metaphorical – walls are bad, we should not build walls, but bridges are good, they make connections."

Piano sees work as his "mission"

The architect was in a meeting in Geneva when he heard about the disaster and soon offered his assistance to the Italian government.

"I've already said I would be happy [to be involved] because that's my mission. I'm also a senator for life and so it is one of my duties to respond to such a disaster in some way," said Piano, who was appointed a member of the Senate of the Republic in the Italian Parliament in 2013. 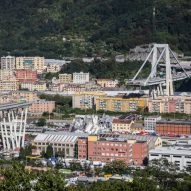 In 2016, Renzo Piano was called upon to lead the reconstruction efforts after several towns in Italy were devastated by an earthquake, which measured 6.2 on the Richter Scale.

Italian engineer Riccardo Morandi built his eponymous cable-stayed bridge in 1974, during Europe's postwar construction boom. The concrete structure was unconventional due to its low span-to-stay ratio and the choice of prestressed concrete encasements for the cables rather that traditional steel.

"Morandi was a great engineer for sure, and he made something audacious, clever and brave but, of course, very fragile," said Piano.

"Fragile in the sense of a beauty that is fragile – it's not a criticism. The bridge demanded an extremely high level of attention during its lifespan."

Constant maintenance was required to keep the Ponte Morandi operational, and its location near a steel factory in a port town meant it was weathered by pollution and the salty sea air.

Reinforcement work was being done to the bridge's foundations, with another round due to begin in October, but a complete rebuild had been dismissed as too costly and disruptive.

Italy's new coalition government has blamed Autostrade per l’Italia, the private company that has the contract to maintain the country's motorways, for the disaster. Ministers have attempted to revoke the government contract with Autostrade and impose a £136 million fine.

The Milan-based firm released a statement saying it was confident it had monitored and maintained the bridge to the "best international standards", reported Reuters.

"At this stage it is not possible to provide any reliable explanation on the reasons for the collapse," Autostrade said.

Italian prosecutors have launched a criminal investigation into the disaster.