Minimalist designer Michael Anastassiades is behind Bang & Olufsen's circular Beosound Edge, which is both speaker and volume knob in one.

Unveiled last week at Berlin electronics fair IFA, the Beosound Edge speaker can be rolled to adjust the volume, while the rest of its subtle touch controls are built into the aluminium frame and only light up when a person approaches them.

Bang & Olufsen describes it as a design object that represents "a divine and unbroken circle of audio clarity, precision and beauty".

The speaker is meant to either sit on the floor as a centrepiece or be mounted perpendicular to the wall, where it can serve to divide spaces in the home.

On both sides, the Beosound Edge has a matt black fabric cover that, next to the polished aluminium body, looks as dark as a void.

"It looks quite surreal as an object, because of the sudden depth change," said Anastassiades. "A gap between the two materials would have allowed a tolerance to exist."

"Here, there is no tolerance, and the in-between space does not exist anymore, which is amazing."

The rolling volume control does not mean the Beosound Edge ends up sitting in a part of the room where the owner didn't want it.

The volume adjusts according to the force of the push its given — so a gentle nudge forwards will only slightly increase the volume, while a stronger one will raise it more dramatically.

The speaker then gently rolls back into its original position, leaving the sound as it was set. The other settings are controlled via a subtle touch interface that, thanks to proximity sensors, only illuminates when a person is near.

This interface is lasered directly into the aluminium. The holes so small that they are invisible to the naked eye and only just allow light to shine through.

The Beosound Edge is the first speaker designed by British-Cypriot Anastassiades, who is best known for minimal lighting designs, like the mobile-style thin black metal chandeliers he created under his own brand.

He said that to reach the final design for the Beosound Edge, his team pushed themselves to remove "layers upon layers until what remained was a visibly pure and simple object".

"Because what happens when you experience highly visually complex products is an initial impact, but once the novelty of that impact dies, there is nothing left," Anastassiades said.

"With visually simple products, there is nothing there to give you that first attraction. No visual disturbance," he continued. "But when you see it the second time around you suddenly pay attention and by the third encounter you become even more intrigued."

Bang & Olufsen is also debuting a new technology with the Beosound Edge, which it calls the Active Bass Port. This means it uses a closed-box speaker design at lower volumes for accurate sound reproduction, but this opens up as the volume is raised to bring out more bass. 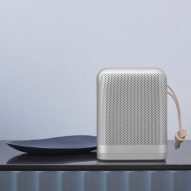 "With Beosound Edge, we are bringing forward a timeless design masterpiece that inspires the imagination with an interaction and experience never before seen in home audio," said Bang & Olufsen concept manager Kresten Bjørn Krab- Bjerre.

"From a distance it is monolithic and discreet, hiding everything that suggests technology, yet it is unforgettable in sound performance, punching above and beyond what you would expect for the size of the speaker."

The Beosound Edge is on show at the IFA consumer electronics fair, which continues until 5 September. It will be available to buy from November.