Scholten & Baijings has installed a tea party with a modern twist in London department store Fortnum & Mason, made up of more than 80 objects designed by the Dutch duo.

The Time for Tea installation comprises furniture designed by the studio and accessories and teaware, spread across a series of small, circular tables. Scholten & Baijings created the installation for his year's London Design Festival.

Among the products created by the studio is an Ottoman daybed designed for Italian brand Moroso, the duo's Colour Wood polygonal tables for Karimoku New Standard and the 13Eighty plastic moulded chair designed for Hay.

Scholten & Baijings wanted to create a new take on the traditional tea ceremony for the installation, and worked to bring together elements of the tea rituals found in England and Japan.

"We wanted to respect the store, so it's about tea, of course, and also about porcelain, but we didn't think it was enough just to show the beauty of porcelain, so we tried to also add a story," Stefan Scholten told Dezeen.

According to Scholten, he and his studio used these objects to compose the setting like a still life – as "a moment in time" – to look as if people had only just left the scene, or could just as easily come and sit at one of the tables to have afternoon tea.

The design firm began with Fortnum & Mason's characteristic Eau de Nil colour, re-upholstering or painting many of their furniture pieces and products on display with the specific shade of turquoise – resulting in what Scholten described as "a field of green hues".

Many pieces were taken from the studio's archives, some were specially designed for the occasion, such as the Porcelain Pattern tea set.

The five-piece set of porcelain tableware was created in collaboration with 400-year-old Japanese porcelain manufacturers 1616 / Arita, who teamed up with the Dutch duo in a bid to reach a younger public. 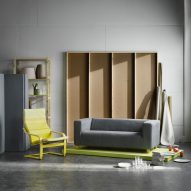 Consisting of trays, plates, bowls, cups and mugs, each piece in the tea set is embellished with a graphic reinterpretation of the gridded fabric pattern designed by Scholten & Baijings for New York textiles brand Maharam.

"All the craft companies are struggling with the same problem, that craft, or the interest in craft, is declining," said Scholten.

"So what all these companies and craftsmen do is to find new ways, or new techniques, to display their possibilities and to show what they can do – to revive it."

Instead of the age-old technique of slip-casting usually used to make porcelain objects, the duo used high-pressure moulding techniques for the new collection. This process allows them to achieve the sharp shapes and subtle details found on each piece.

"What we always like to do with all this DNA, all these traditions, is to come up with a contemporary touch. To bring the designs to a higher level by working with new techniques, while still including the appreciation for craft," continued the designer.

The tables and chairs rest on a green and blue-hued marble floor, designed by the studio and produced by Italian marble manufacturer Luce di Carrara.

To make this, blocks of marble were carved into individual cylinders, glued together with bio-resin, and then polished and levelled.

The curtains surrounding the perimeter of the installation are printed with the same gridded pattern used on the tea set, and have been woven in the UK for American textile company Maharam.

Tea party performances will take place four times a day throughout the nine days of the festival on the first floor of the historic Fortnum & Mason store in Piccadilly.

The installation is just one of the many events taking place during this year's London Design Festival, which is open from 15 to 23 September.

A huge wooden maze-like structure will spring up in the Sackler Courtyard of the V&A during the festival, and set designer Es Devlin will add a fifth flourescent, poetry-spouting lion at the base of Nelson's Column.