Casa R is located in the town of Vilches in southern Chile, about halfway up the Andes Mountains and part of the Patagonia region that spans into Argentina. Nearby attractions include Maule Lagoon, Colbún Lake and several nature reserves and national parks. The 96-square-metre dwelling serves as a vacation home for Lagos and his family.

The cabin sits on a remote site in the forest and looks north toward a river valley. The dwelling rises two storeys in order to "rescue views of the valley above the tree foliage and landscape," said Lagos, who leads the Santiago-based architecture studio Tu Croquis.

Rectangular in plan, the cabin has a sharply gabled roof, which helps prevent snow accumulation. In order to minimise the disturbance to the landscape, a large portion of the cabin is lifted above the ground. This is particularly evident in the rear of the dwelling, where steps lead up to ground level. 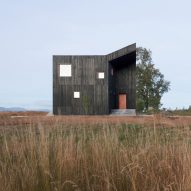 Steel was used for the structural frame due to its fire- and water-resistant qualities, and exterior walls are wrapped in black-painted wood. On the north side of the cabin, a window wall offers a strong connection to the landscape. The cabin's materials were carefully studied "as a way of integrating the architecture into the context".

The front of the dwelling features a "chiflonera" – an area between the interior and exterior of a building that helps regulate temperatures. These buffer zones are commonly found in the region, where climatic conditions can be extreme.

Inside, the ground level contains a compact kitchen and living area, along with a bathroom. A spiral staircase leads to the A-framed upper level, where the Lagos placed a bedroom, a sitting area and a work desk. Dark structural beams were left exposed, providing a contrast to white walls and wooden flooring.

For the interior layout, the architect used four different prefabricated modules, some of which are repeated. One module is fully enclosed by walls, while the other three are open. The modules can be placed "side by side in an open plan or open space", said Lagos, adding that bedroom modules could be added to the cabin's perimeter if needed.

The finishes and decor are meant to be durable and easy to maintain. In the kitchen, the architect used plywood, acrylic and stainless steel. Other spaces feature plastic furniture from the Chilean company Muebles Sur and wooden chairs designed by Charles and Ray Eames.

Other getaway spots in the Chilean mountains include the La Leonera Mountain Retreat by Del Rio Arquitectos Asociados, which features a pointy roofline, and a bright red cabin by Felipe Assadi Arquitectos that sits within a lush, verdant site.

Photography is by Felipe Lagos. 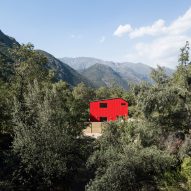