An abstract chess set made from recycled materials and a set of blue-powder-coated tableware are two of the five objects commissioned by the Ace Hotel for the fourth edition of Ready Made Go.

The objects, which will be integrated permanently into the interiors of the hotel, were shown in the Ready Made Go exhibition in the lobby of the Ace Hotel in Shoreditch during the London Design Festival.

For the fourth year designers were commissioned by the hotel team, alongside Ready Made Go curator and Modern Design Review editor Laura Houseley, to create objects and furniture.

The project begins with a wish list of objects from the hotel, which can range from basic items such as door handles to more outlandish ideas such as a climbing wall. Houseley is tasked with matching up the items with the London-based studios who are best suited to designing them.

"Trying to match an object with somebody who is already working with a particular material or method is part of the challenge," Houseley told Dezeen.

"Each year we have designers who are well known and some who are very much not. I hope Ready Made Go gives a good overview of what is going on in design in London at the moment."

Following on from last year's Ready Made Go 3 collection, where each of the objects were made from recycled materials, sustainable surface material specialists Alusid returned to Ready Made Go.

This time Alusid worked with Marco Campardo and Lorenzo Mason of M-L-XL, to create a games table in cast Silicastone – a material made from fused recycled glass and ceramics.

The table features a unique white-to-black gradient surface inspired by the black-and-white checkered pattern of the traditional chessboard, and comes with a series of matching oversized chess and draught pieces made in the same material. 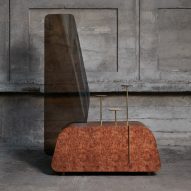 "Our ethos is rooted in our attention to modes of production and local resources, and we are particularly interested in making as a form of knowledge-production," said Campardo and Mason.

"That is why our work explores the use of different materials and traditional craftsmanship, bringing those forms of knowledge to life in the contemporary context."

"In general it is always very nice to be given a brief... it can be challenging and open new, perhaps surprising, channels of thought that otherwise wouldn't have arisen," commented Minimalux founders Mark Holmes and Tamara Caspersz.

"The result is a design that we're proud of."

Swiss-born, London-based Laetitia de Allegri's sturdy tableware is cut from sheets of blue-powder-coated stainless steel, which are then welded together.

Named Secant, after the geometry that inspired it, the collection features straight lines that cut perfect curves in two or more parts. "The aim for me was to create pieces that are practical, yet elegant and carry a story," said de Allegri.

Secant includes a cutlery/napkin holder, bread basket, caddy, and large and small trays, all of which will be used in the hotel for special events on the seventh floor.

Recent Kingston School of Art graduates Will Drye and Dom Postlethwaite of industrial design studio WD-DP created a set of wall hooks made using the simple process of tube pinching.

Tubular steel, with a 19 millimetre diameter, is bent and partially flattened to allow the hooks to sit flush to the wall, while the back is fitted with a wooden block that prevents the hangers from scratching the wall surface.

"By celebrating these off-the-shelf materials and common processes, we aimed for the object to place a higher value on industrial materials and simplicity of manufacture," said the duo.

The collection of items was completed by co-founder of craft studio Forest + Found Abigail Boot, who has made a bedspread called Raised Ground using a natural homemade dye.

The unique taupe-coloured dye was made by Booth using clay that she sourced from the foundation of a nearby building in east London.

"All of the pieces are still in use and I love that they are always here," explained Houseley. "When we commission the designers we are very clear that the items have to have longevity."

"The door handle by Philippe Malouin is one of my favourites. It's made from an industrial Allen Key and it's the most perfect shape and size," continued Houseley.

"For me that is the spirit of the project – a really awkward brief with really tough constraints that requires a solution with ingenuity that doesn't require spending a lot of money."

Other exhibitions at London Design Festival, which ran from 15 to 23 September, include an exhibition of furniture by emerging Uruguayan design studios at Aram Gallery, and another of work by Japanese master metalworkers at Japan House.

More from the London Design Festival