The Sea Ranch, a haven for modernist architecture on the Californian coast, will be the focus of a major exhibition at SFMOMA. Curator Jennifer Dunlop Fletcher gives an overview of its history and explains why it remains an important example of "environmental stewardship".

The Sea Ranch: Architecture, Environment, and Idealism will include concepts, plans, and new models that detail the early design stages of the residential community, located along a 10-mile strip of wooded land overlooking the Pacific Ocean in Sonoma County.

"We see this as a Northern Californian icon, and we really look forward to unpacking it in different ways... to think about its role in history and this magical lure that it still has," Fletcher told Dezeen in an exclusive interview.

She intends for the show to demonstrate how "marrying modern architecture with environmental stewardship" occurred at the site, through the 100 works she selected with co-curator Joseph Becker.

The Sea Ranch is celebrated as one of the best collections of modernist architecture on America's West Coast.

Established in the early 1960s, the community is populated with simple timber retreats that combine the era's popular modernist architectural style, integration with natural landscape, and environmental and sustainable strategies.

The Sea Ranch was the brainchild of American architect and developer Al Boeke, who enlisted landscape architect Lawrence Halprin and a group of Bay Area architects to build new type of neighbourhood on the rugged plot.

A former employee of modernist architect Richard Neutra, Boeke's ambition was to create an affordable neighbourhood, rich in architectural flourish and community spirt. The idea contrasted other "manicured" developments that were cropping up elsewhere in America around the same time.

Aim was for more than "just a group of pretty houses"

"[Boeke] was very interested in new towns: the European interest in not suburbs, but pre-suburbs," Fletcher told Dezeen. "The idea that you could have everything in a city but on a smaller scale, as well as access to agriculture that would be sustainable for that little community."

Previously occupied by indigenous Pomo Indians, loggers and a sheep ranch, the site's natural features range from rugged coast to meadows and then forest. The major Highway 1 cuts through the site, but efforts were made to lessen its impact on the area as much as possible. 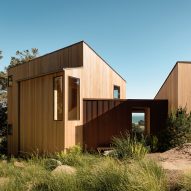 "It has a really interesting environmental condition in itself," said Fletcher of the property as a whole.

Halprin advocated for an environmental and sustainable approach – for which the project would later become renown – rather than building "just a group of pretty houses".

The framework called for affordable homes with simple forms, covered in unfinished redwood and cedar siding to reference agricultural barns typical to the area. The materials were also suitable to withstand the harsh coastal winds.

Recent renovations of existing homes, and new buildings on the property – which remains a popular vacation spot – have also had to adhere to these principles.

"What they have achieved very successfully is maintaining it as a meditative community that values the environment, the surroundings that they're in, and making that a priority," Fletcher said.

The Sea Ranch: Architecture, Environment, and Idealism will be on show at the San Francisco Museum of Modern Art from 22 December 2018 to 28 April 2019.

Read on for an edited transcript from our interview with Jennifer Dunlop Fletcher:

Eleanor Gibson: What can we expect from the exhibition?

Jennifer Dunlop Fletcher: We're going to be focusing the exhibition on the earliest drawings and concepts for The Sea Ranch, so the drawings and vintage photography from Joseph Esherick and Associates, Barbara "Bobbie" Staufacher Solomon, Lawrence Halprin, and really looking at their interest in marrying modern architecture with environmental stewardship.

Eleanor Gibson: Can you summarise what The Sea Ranch is? Why is it important?

Jennifer Dunlop Fletcher: The Sea Ranch was a development in Northern California about three and a half hours north of San Francisco, right on the coast. It was a 10-mile-long development, but only one mile wide, but in that mile width the land is both rugged coast, meadows and then forest. It has a really interesting environmental condition in itself and it also has Highway 1 running through it.

The developer of The Sea Ranch in the 1960s, Al Boeke, was a trained architect who worked in LA for Richard Neutra, and then got a position in Hawaii to develop the real estate for the arm of Oceanic properties, which was funded by Dole Food Company.

He was very interested in new towns, the European interest in not suburbs, but pre-suburbs – the idea that you could have everything in a city but on a smaller scale, as well as access to agriculture that would be sustainable for that little community.

While The Sea Ranch, he noted, was such an interesting property, the initial idea was to not do a new town, but first start with a second-home opportunity for the creative class – as they called it – from professors to plumbers.

[These were] small-footprint, modern architectural homes tucked into the landscape, with equal access to the ocean and the forest, and to make that a priority of experiencing of the land. So being a little bit in contrast to some of the developed communities that might have a very manicured golf-course aspect to it. After the first phase, they thought that they would then go into developing a new town.

So that's a little bit of The Sea Ranch, it has really interesting architecture. The collective of architects all from the Bay Area were interested in architecture that both was responsive to the history of the land, its history as a ranch, its history as a site where local Indians, Pomo Indians, would also set up some time there and experience land, walking the land is a big part of it, a meditative community they call it. That was their earliest intention.

Eleanor Gibson: Was there an architectural aesthetic that they worked towards?

Jennifer Dunlop Fletcher: They had noted in that area that the history of the barns was important, but also coming out of a moment in mid-century modernist architecture's efficiency of space, and so externally really looking as though it not hides into the land, but doesn't spite against the land.

While inside, just incredible efficiency. Within 600 square feet; 800 square feet you could have a two- or three-bedroom house.

Eleanor Gibson: What would you say are some of the standout projects?

Jennifer Dunlop Fletcher: They envisioned a series of condominiums, which at that time period if you can imagine doing something like that outside of the city was really novel.

In the end, they only did one called Condominium One, which has nine units in it, and the fuller vision was to have 10 of these condominium units. I think that is pretty spectacular, the idea of condominium, at that time was pretty ground breaking.

The combination of the different designers and each one bringing a slightly different agenda, and each one having a different goal. So Moonraker Club, where you have the flying buttresses off a nice spine of locker rooms, with the pool tucked into a berm to protect it from the wind. As well as the tennis court, you have to go up and over the berm to get to the tennis court.

Inside you find the Bobbie Stauffacher super graphics that are just a visual wonder, and it's just as fun going into the locker room as it is to take a swim or play tennis.

Eleanor Gibson: What is your opinion of new developments on the ranch?

Jennifer Dunlop Fletcher: It's almost impossible to achieve something one might set out as a goal, but I think what they have achieved very successfully is this maintaining it as a meditative community that values the environment, the surroundings that they're in, and making that a priority.

Eleanor Gibson: What prompted you to run this exhibition now? Is there something about the project that you think contemporary architects can learn from?

Jennifer Dunlop Fletcher: There were a few reasons. I'm co-curating this with my colleague Joseph Becker and I think both of us just couldn't believe that there hadn't been an exhibition yet to date.

We see this as a Northern Californian icon and we really look forward to unpacking it in different ways: thinking about the role of development in wanting to be associated with the contemporary architecture of its time, and as a suggestion that people who are living within this development are forward-thinking, more socially progressive.

Also, wanting to think about its role in history and this magical lure that it still has.

What is it about the place that is so appealing today? Is it very different from other places and what is that? How do we capture that in an exhibition? Who were the designers? What did they go on to do? There were so many questions that came out of this.

Eleanor Gibson: How did you go about sourcing the material?

Jennifer Dunlop Fletcher: We were quite lucky that MLTW (Charles Moore, Donlyn Lyndon, Richard Whitaker, and William Turnbull) and Joseph Esherick, their archives are housed at Berkeley's environmental design archives, and then Halprin's archives are pretty well intact in University of Pennsylvania's design archives. We had a smattering of drawings that had been gifted from William Turnbull to the museum. So the three really made an easy source for the material.

There are just hundreds and hundreds of drawings, and in the end we will have over 100 works in the exhibition, as well as models – not vintage models, because those have been destroyed or not found – as well as a walk-in model.

Eleanor Gibson: Is this the first time that these are all being seen?

Jennifer Dunlop Fletcher: We've noted that there have been photography exhibitions on The Sea Ranch before, and we are including some of that photography, more laid bare.

It will be the first time that the drawings are being seen together. We also have large image from Iwan Baan from 2015, some enamel signed by  Bobbie Staufacher that have never been seen, together with this material.

Images are courtesy of SFMOMA.